Action on the Edge 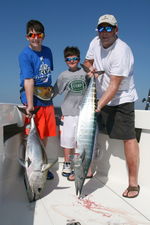 We are still averaging between 2 to 5 sailfish per day and that has stayed pretty consistent. Although that is not bad at all, we are still missing those banner double digit release days. We just have to wait for the right conditions to occur and Im sure it will happen. A lot has happened since my last report and I have fished every day but one since the last report. The one day we didnt fish was due to the wind blowing extremely hard. It has been a pretty windy March so far. Another day that the wind blew we decided to stay and fish for tarpon in the bay. I went up to North Bay and fished an area I hadnt fished in for quite a few years. We got lucky and caught an 80 pound tarpon on our first drift. We also caught a smaller tarpon and then caught a big tarpon that probably topped out at 125 pounds. We also caught a few jack crevalles in between. Definitely a nice way to spend the day catching big fish on light tackle spinning rods.

We have also had some great days fishing on the edge. One particular day comes to mind. I was fishing with a good client Donald and his two young sons. The weather was nice and we were catching some kingfish and bonitas which kept everyone busy. We then got a tripleheader, but not sailfish. The first part of the tripleheader was a 30 pound blackfin tuna on the kite, then a 25 pound kingfish on the deep line, and a 30 pound wahoo on one of the flatline. All this and all at the same time. Lucky it was a triple, because we only had Donald and his two sons. The boys did a great job with the wahoo and king and Donald finished it with the tuna. I have never had a king, wahoo and tuna at the same time so now we are calling this the Miami Fantasy Slam. We the finished off the day by catching a 65 pound sailfish and calling it a day. What a way to spend some quality time with your kids!

.We have also done another evening tarpon trip and did well releasing 4 out 5 tarpon and all the tarpon were between 60 and 100 pounds. Going back to the edge, it seems that spring may be showing up very soon as there have been a few big kingfish on the reef as well as some cobias, a few tunas and some mahis. Spring is when we get this kind of variety and is my favorite time to fish, so hopefully well have a great spring season. I havent done any swordfishing since my last report, and I rally havent heard that much about either the day or night sword bite. We are scheduled to go night sword fishing this week, but the wind may cause us to rethink that and go tarpon fishing instead.

Spring is near and now is the time to book your trips for April and May. I am also pretty confident that I will be in Venice Louisiana from mid June through July. I still need to get a few more clients booked, so if you are interested in fishing that great fishery, please give me a call.