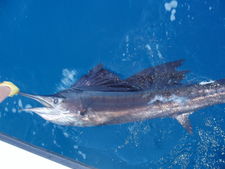 For the past two months I have been mostly swordfishing, and although we have been fishing a little bit in the day as well, the day time action in Miami does not really start to heat up until we have a few cold fronts. Well, we have had a few cold fronts and you can say the action has heated up quite a bit. Our first cold front came last week, and the second front just past this weekend. This was good news since I had a client I fished with last year coming down to do some swordfishing and some daytime fishing. Last time we went out we caught 11 out 14 sailfish and had a blast. Yesterday we caught our bait and headed out to set up on the edge. The wind was from the North at around 15 knots. The water didnt look spectacular but wasnt horrendous either. I spotted quite a bit of bait in the water and stopped to put our spread. Well I must have stopped in the right spot, within minutes we had our first sailfish on and with 30 minutes we had caught 4 sails. We continued working our area and by the end of the day we were 6 for 9 on sails and caught a bunch of dolphin and a few kings. We did have a king within 10 feet of the gaff that was a solid 35 pounds. Unfortunately for us the hook pulled right next to the boat. It was a great day on the water with a lot of action. Hopefully Mark will continue to bring his luck on board this week when we get out to catch a broadbill.

This is the time of year that all us sailfisherman have waited months for. We should be seeing the numbers of sailfish steadily increase and stay good all winter and spring. We should also expect good action from dolphin on the edge as well as kingfish and hopefully a wahoo or two. I did hear of two wahoo caught yesterday.

The swordfish bite has finally slowed down a bit, but that is mostly due to the moon phase and should pick right back up this week. Not many boats have been out this past week and a half due to the NE winds and bigger seas in the Gulfstream. There were several very big fish caught earlier this month. The biggest one that I heard that was actually weighed on a scale was 383 pounds and that was caught by a good friend of mine  Drew, who also happens to run the Dark Side of the Moon Swordfish Tournament. Congrats to Drew and Steve. I did have a very good client down from Connecticut a week and a half ago and we went swordfishing two times. The first night we had two fish on, including one that was grey hounding all over the ocean. Unfortunately the hook didnt stay put on either fish. The next night was worse as we ended up not getting a bite the entire night. That hasnt happened in a while, and as a charterboat captain, it is not a good feeling. Fortunately, John, my client has swordfished with us quite a bit and has seen some good action with us. I made it up to him with some incentives and he is coming down again in a month.

Now is the time to book your winter trips. We also have a few of the sailfish tournaments open again. We did have one client book us for all the sailfish tournaments this year but had to back out since he just bought a new sportfisherman and is obligated to fish on that boat. So, if youre interested in some tournament action or simply want to go have some fun on the water, give me a call and lets go catch-em.