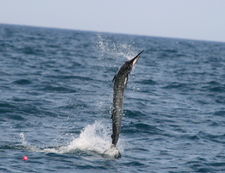 The past few weeks have been fairly busy and the fishing has been good to excellent.
On the edge there are a lot of sailfish still around as well as lots of dolphin. The big kingfish finally appeared from one day to the next. For the past week and a half, every trip has produced at least one kingfish over 25 pounds. The biggest king we got these past two weeks was a true smoker of close to 50 pounds. It was an impressive fish and an impressive fight. The blackfin tunas have still not materialized in any big numbers yet. We did have one day where we caught two in one day, but for the most part it hasnt been as good as it should be this time of year. Im sure it is only a matter of time before we start seeing bigger and more numerous blackfins on the reef.

For three days last week, I have a customer who is in a wheelchair that comes down and fishes with me. For the past two years, since he needs a larger boat, we have used the L&H charterboat. The owner and captain Jimmy David is a close friend of mine and during these trips we split the time as captain and mate. This makes it fun for both of us as I get to run the boat half the time while Jimmy mates and then he runs it while I mate. We had three great days of fishing. The first day we caught a 180 pound blue marlin which we released. The second day we caught 11 sails and a big king and tuna and the third day we caught 12 sails and some dolphin.

I also did a couple of daytime swordfish trips. One trip produced well and we had bites on every drop and caught several fish. The second trip unfortunately was not as successful as we didnt get a single bite all day. We made 7 drops in total and had the best of baits down there, but had no takers. I was quite disappointed as just 3 days earlier we had fish and bites on every drop. We are getting into the summer soon and the daytime swordfishing will become better and much more consistent. I havent done any night sword trips, but from what I hear it has been very slow.

The forecast for the next month is great if you want to fish on the edge for sails, kings, dolphin and tunas. This is the time of year that the edge really produces a lot of variety of fish. This is also the time of year that the late afternoons can be truly outstanding. We do a lot of trips that start at noon and end at 9:00pm. I also can offer trips that start at 5:00pm and end at 9:00pm. Its a great way to leave work an hour or so early and get in some quality fishing time. Whatever time frame you decide, now is the time to fish the edge and catch some fish!