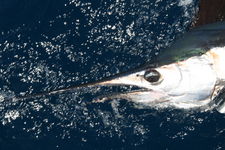 What a great couple of weeks of fishing. I have fished 20 days already this month and it is only April 22nd. I have had a blast as this is one of my favorite months to fish due to the variety. The one thing I have to say about April so far has been the weather. For the most part we have had a very windy April and the seas can get a bit rough, but my customers hung in there and we had some quality days. The past few days the ocean has been calm and this is more of the trend we will see for the next few months. Luckily the current is going so even with calm seas, the fishing will stay good.

Sailfish finally made the big push south and we caught sailfish one every single trip this month. Our best day (as far as hookups) we hooked 19 sailfish in one day. Unfortunately we landed about half of them, but to have that many fish one in one day is awesome. We have also had quite a few doubleheaders, triples and even quads. One day we had a triple with only one angler on board. We actually caught all three of the tripleheader  it was a blast. My daughter also had spring break in April and I took her out for a few hours and we caught 6 sailfish out of 6 bites. We actually had a doubleheader where both sails ate the baits at the same time, headed south together and even jumped side by side for quite a while. It was really special as my daughter looks up at me and says, Dad that could be a father and daughter sailfish, just like us.

In the past week or so, we have also managed to catch a few cobias (up to 3 in one day). The cobias have been eating the kite baits and also the deep line. We have also done well with the blackfin tunas and have caught at least one blackfin every trip this week. The blackfins we have gotten are still on the small size from 15 to 25 pounds, but we should start seeing the bigger tunas coming through soon.

Dolphin were around last week for a few days, but I was in Key West fishing the world Sailfish Tournament with my good friend Jason on the boat Midnight Blue. When I got back the dolphin fishing tapered off a bit, but quite a few 30 to 40 pound dorados were caught while I was gone. We should start to see another push of dolphin real soon.

Without a doubt, my favorite trip this time of year is fishing a full day but starting at noon and fishing until dark. We did that the other day and from noon to about 5:00pm the fishing was OK but not awesome. Once the magic hour rolled around (5:00pm to 6:00pm) we hooked 5 sails and caught 4, we caught a tuna, dolphin and bonitas. It was non stop action after 5:00pm.

I havent done any sword trips since my last report, but the bite, especially at night, has been very good, with guys catching multiple fish per trip and some big ones at that. With the weather calming down, this is definitely the time to plan either a swordfish trip (day or night or both) or a trip on the edge. It is also the time to plan a trip to the Bahamas. As you can see, it is definitely time to go fishing and catching, so give me a call and lets set up that trip!