Time to Avoid the Heat

Since I got back from the Bahamas I did a few trips here in Miami and also went on vacation. The trips in Miami we did surprisingly well on the edge catching some kings, a few blackfin tunas and surprisingly a pretty consistent sailfish bite. No huge numbers but at least one sailfish per trip and as many as three in one day. The other trips we did were for mahis offshore and that was decent as well. Most of the trips we caught at least a dozen or two mahis although we did have one slow trip were we couldnt find anything to fish to (birds or debris), but that was ok because we came in on the edge and caught sailfish and some tunas. I also did two daytime sword trips and we had bites on both trips. The first trip we went 0 for 2 and the second trip we caught 1 out 2 swords. Nothing huge, but still swords.

My vacation was to Hawaii and that was great. I fished with Capt. Kevin Nakamura on the Northern Lights who has become a god friend. I helped him out on one day with one of his charters and then I chartered the boat the other day. The day that I chartered the boat I caught a huge 170-pound yellowfin tuna, 1 for 2 on blue marlin and 1 for 2 on spearfish. That is one great day. I love fishing with Kevin because he is a wealth of knowledge for blue marlin fishing and I like to compare notes on the way they fish in Hawaii and how we fish for blue marlin in the Bahamas and here. Fishing with someone who has so much knowledge about blue marlin fishing you are bound to learn something and I did learn plenty. Taking what you learn and applying it to my endeavors helps me stay on top of my game and I am always willing to listen and learn. If you ever do go to Hawaii, this is the guy you want to fish with. Check his website out and if you do book him, tell him I sent you  he will definitely take care of you. http://www.fishingnorthernlights.com" target="_blank">http://www.fishingnorthernlights.com

Now that I am back I do have one more trip planned to the Bahamas (Grand Cay /Walkers Cay) at the end of this month as well as a few daytime sword trips and some mahi trips in the gulfstream. Besides those trips, I really want to get back into the nighttime swordfishing and see if we cant get back on the fish. The past few years the nighttime fishery has dropped off but that may well be due to the fact that so very few people do it anymore. While fishing with Kevin we realized that in the last month and a half I have either caught or captained the boat for 6 different billfish species (Swordfish, Atlantic Blue Marlin, White Marlin, Atlantic Sailfish, Pacific Blue Marlin, Spearfish). We also know that there are quite a few anglers that need to catch a swordfish as part of there billfish quest and what better way to catch one than night time swordfishing in Miami. You can catch an IGFA legal swordfish during the day, and we have caught many, but the nighttime for an IGFA legal catch is better. The daytime fishing is very exciting and you do seem to catch bigger fish, but most people opt for the electric reels and I am not bashing them or opposing them, but I truly enjoyed the nights of getting in the harness and doing battle with these great fish at night. They certainly seem to fight harder at night and a 300-pound sword at night was usually a two-hour battle at least. So with that said, if you still need to catch a swordfish for your billfish quest, or simply want to fight a big fish in stand up tackle, give me a call and lets set it up. Plus, what a better way to avoid this daytime heat than going out in the evening and catch a big broadbill. If swordfishing is not for you or if you have kids or family in town and want to catch some fish, summertime mahi fishing in the Gulfstream is a blast and who knows what else you might catch while you are out there. We have caught quite a few wahoos and even blue marlin while fishing for mahis. So give me a shout and lets set up that trip! 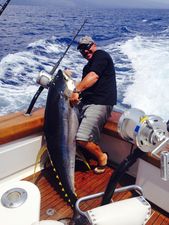