Back from the Bahamas 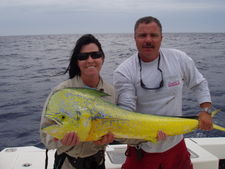 Im back from the Bahamas! The tuna fishing this year was not very good and that was disappointing since that is the reason we go to Andros this time of year. The tuna bite was late this year and will probably take off next month. The good news is that there were plenty of big dolphin around. We caught dolphin from 10 pounds up to 38 pounds, and most of the dolphin were from 20 to 35 pounds.

Since the tuna fishing was slow, we also spent a lot of time bottom fishing and we were surprised with some very good action on snappers. We didnt catch any big groupers, but we did catch a few really nice muttons and plenty of monster yellowtails. The yellowtails averaged two pounds and all the way up to 5 pounds. A five pound yellowtail is a slob and great action on a 12 pound rod.

The best part of this trip was my customers. I got to fish with some of my nicest customers. Even with the tuna fishing being slow, we managed to target other species and everyone had a great time. Next year, I am probably going to target a different area in the Bahamas and stay for about a month. I usually put this trip together in the beginning of the year, so Ill keep everyone posted at that time.

From the few phone calls I made since I came back, the fishing over here has been a little bit on the slow side. There have been a few sailfish on the edge as well as some kingfish and bonitas. The mahi fishing has been hit or miss. The schools of mahi have been anywhere from the 800 feet depth line all the way out to 25 miles offshore. The size of the mahis has also been varying with some schools holding bigger fish, but many schools of the really small peanuts. Any mahi kept must have a 20 inch fork length, so please measure your small fish and definitely release the small ones. Keep what you can eat and release the rest.

From the reports I have gotten, the nighttime swordfish bite has been a bit inconsistent as well. Some nights people have been getting a few shots a night and other nights nothing. We are definitely getting into a better month (July), as June can be a slow month and the swordfishing in August can get red hot. The good news is that there have been a few big fish (300 pound plus) caught in the last week, so although right now you may not get a lot of shots, the one or two shots you get may be fish of really good size. Ill have a better report next week some time as I have a few night trips scheduled over the coming weekend and next week.