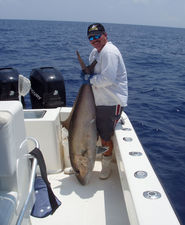 We just got back from Bimini yesterday and the fishing was great over there. I went over with a great client and his son, whom had never really fished over in the Bahamas. We found some decent dolphin on the way across and the seas were perfect for us. We cleared Customs and headed to our first spot. After anchoring and letting the chum flow, we were soon covered up with jumbo yellowtail snappers, cero mackerels, barracudas, amberjacks, and plenty of other species as well. The action was non-stop, but it was time to go to our mutton snapper spot. Once we anchored up, we had our first mutton in the boat in just a few minutes. We didnt get any other bites for about an hour and then the action was very good. We caught our share of muttons including some decent sized ones (~20 pounds) and with anglers who were pretty much wiped out, we headed back to the Big Game Club for a quick shower and some dinner.

The next day we went north and after a fairly long ride, arrived to our first spot. We caught some big flag yellowtails, but then the sharks moved in and basically ate every fish we hooked. We pulled anchor and went to the second spot and the snappers were there and very eager to bite. We caught fish until everyones arms were sore and headed back. We were going to hit the muttons again, but we had plenty of fish and the anglers were worn out. As matter of fact, one of the guys told me that they had never caught that many fish in there life and that will always put a smile on a charter boat captains face.

The third day, we were greeted by very early morning thunderstorms. Once the storms cleared, we decided not to risk being caught in the storms and headed back towards Miami. We found some dolphin on the way back and made it back just before the thunderstorms started again. We had a great time in Bimini and I am looking forward to going back again in a week or so.

The fishing on this side of the Gulfstream has been OK. There are still some sailfish around, as well as kingfish and a few blackfin tunas. The best action has been in the late afternoon. Our trip tomorrow doesnt even start until 1:00pm and hopefully the afternoon will keeps us busy catching fish. There have also been a good showing of amberjacks on the wrecks. Most of the dolphin have moved offshore and we have a few dolphin trips coming up this weekend.

The evening swordfishing has been very slow for us and for that matter most of the fleet. You get a shot or two a night, but if you fail to stay connected, you can come home empty handed. We had 5 trips in the last 2 weeks, and caught 3 swordfish. Swordfish are a primetime billfish and catching three fish out of 5 trips may seem good to some anglers, but we have gotten spoiled by sometimes catching three fish in just one trip. All fishing has its cycles, but we have had some weird water on the sword grounds. The water temp has been off compared to years past and we have had a very strong offshore current. I noticed the water temp and current on the sword grounds while coming back from Bimini yesterday and it seems like the temperature has risen a bit and the current is flowing well. This should be good news as we have another sword trip coming up in the next few nights. I would imagine that by the next moon phase, these fish will be snapping again.
Now is the time to book your Bahamas trips. I am almost completely booked for June and July is starting to book as well. We also have the upcoming summer swordfish tournaments, so give me a call and lets go catch-em!