A Bit On The Windy Side

The topic of conversation these past few weeks has been the windy conditions. First we had a threat of a hurricane that hugged the Florida coastline bringing us windy conditions. The hurricane went up the coast but then veered back slightly to give us a few more days of wind. After that we had a stubborn high-pressure set up and give us string easterly and northeasterly winds. The good news is that all this wind has sparked up the fishing on the edge. The bad news is that we had quite a few daytime swordfish trips that we had to cancel and two Bimini wahoo trips that were also cancelled. The issue with swordfish trips is that any wind out of the north, northeast or northwest going against the strong north current of the Gulfstream can really kick up the waves. While it is perfectly fishable on the edge where you are only out 2 miles or so and out of the strong Gulfstream current, it is downright nasty if not at times unsafe in the Gulfstream. The same applies to the Bimini trips, as you have to go through the Gulfstream to get to the Bahamas.

The good news is that we were able to convert one of our Bimini trips to a two day fishing on the edge here in Miami and that worked out well. The first day we caught 6 sailfish out of 6 bites and the second day we went 3 for 6 on sails. Following that trip we had a two day swordfish trip that we had to cancel as the customer did not want to fish for anything else and that was a shame as some of the boats that went out went into double digit sailfish releases. We had another Bimini trip cancelled and then I had one customer fly in from France to do 3 days of swordfishing and one day of fishing on the edge. The first day we fished with Wilfred, his young son and his wife and had a great day catching 2 sailfish, 10 decent mahis, 3 tunas and some cudas. It was a good way to start our trip. The second day we carefully ventured into the Gulfstream in search of a daytime broadbill. The day was not very pretty with rough seas and rainy conditions and to make it worse, we never got a bite other than a small shark that we caught. The only positive note was I was so very impressed on how my 37 SeaVee handled the rough water. What a difference 3 extra feet, 8 more inches of width and 4 more thousand pounds makes compared to my older boat. We were able to run back at 30 knots in some pretty nasty conditions without getting beat up at all. The third day we went back out to the sword grounds and it was still very rough but we at least had sunny skies. Our 2nd drop of the day and we finally hooked up. Wilfred manned the rod and we released a small swordfish. It was Wilfred’s first broadbill and a big congrats to him. The fourth day the wind kicked up a bit more in the morning so we elected to go sailfishing and give most of the action to his 8-year-old son. We had bait from the day before so we were one of the first boats on the edge. Just as we are setting up I see a mahi racing in the water. We pitched a live bait and the youngster made quick work of the mahi. With only fishing a minute or two we already had a fish. Almost instantly we hooked up to a doubleheader of sailfish and Wilfred and is son caught them. Now we are really looking good as the 8 year old boy successfully caught and released his first sailfish all on his own. We set up again and the youngster catches another sailfish. Things went quiet for a while and then we caught a kingfish. Things went quiet again, so we ventured offshore and once we got closer to the Gulfstream we could see the waves kicking up. Finding another spot on the edge, we set up and Wilfred caught another sailfish. We ended up the day with some mahis, 4 sailfish and a kingfish. It was a great four days of fishing with them and I hope to see them back next year and hopefully next year we will get that 300 pound broadbill for him. 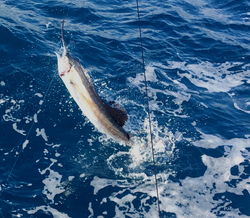 This week we are expecting more windy weather and of course I have a Bimini trip and 2 daytime sword trips as well as 1 trip on the edge. The Bimini trip and sword trips are in jeopardy but maybe the customers will elect to fish the edge, as the action has been red-hot. By far this has been the best September and October that I can remember in may years in respect to sailfishing. Hopefully this is an indication of a phenomenal winter sailfish season. Speaking of winter sailfishing, now is the time to look at your calendars and get you days booked. Days are filling quickly and I am really thinking that this is going to be a banner year.