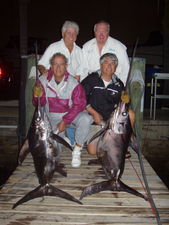 Quite a bit has happened since my last report. For one, we fished two sailfish tournaments. The first tournament was a one day tournament named the Billfish Challenge and we ended up in 3rd place with 12 sailfish releases. We had a lot of action and we witnessed something that will be remembered forever. We caught our first sailfish and according to the rules, the leader must touch the rod tip and you must also get a picture identifying the sailfish. We did that and the sailfish took off for another run. After we got the sailfish back to the boat again, a huge 350 pound mako shark was hot in pursuit. The first time the mako rammed the sailfish against my boat at almost full speed. The mako then turned back around ready to hit the sail. Although the sail was half dazed, it managed enough energy to scoot away at the last second as the mako came again at full speed. With the sailfish moving out of the way, the mako hit my boat full speed with its head and literally shook and moved the boat backwards. I never actually got to see the mako eat the sailfish, bit you knew it was only a matter of time. After a few minutes we had another sailfish eat our long bait and you guessed it, the mako came and ate that one as it was eating the bait on the kite. It was truly an amazing site to see the speed and power of the mako shark and in broad daylight.

Sailfishing continues to be the species we have been targeting. The sailfishing was only OK for a while, until we got north current and blue water. Now the sailfish bite is ON. Yesterday we had some of the prettiest looking blue water around. The fish realized it as well as we caught 9 sailfish and quite a few dolphin and bonitas, Kingfish have been inconsistent all winter long, but we did see and have quite a few cut offs yesterday. If this water and current sticks around, we are going to have some real good days on the water.

I also managed to go swordfishing two nights and caught swordfish on both nights. The first night we caught 2 swordfish and lost one that was estimated at over 300 pounds. The best part was that all this was done by 8:45 and the anglers were so exhausted and had enough sword steaks to last forever, that we were back oat the dock by 9:45. The next swordfish trip was a sailfish/swordfish combo trip and the lucky angler got to catch both species.

I only have three open dates in March left but I do have dates open in April. We are entering springtime, which is probably the best time to fish in South Florida, so give me a call and lets go catch-em!