Sorry for the long delay between reports, but I have actually fished every single day since my last report and finally got a day off today due to a cancellation. It sounds like a broken record this year, but the fishing has really been up and down. We will have one week were the fishing is good with quite a few sailfish, some big mahis and kings followed by some days of slow fishing. That is mostly due to the conditions such as current, water clarity and wind. The good news is that even when the conditions are not quite right, we have managed to catch some fish. I had a trip this week with a group of good customers that have been fishing with me for years. They were set to fish with me 2 days. The first day, there was not a drop of wind. We could not kite fish even if we used helium on the kite; there was virtually zero wind. There was also no current and green water. So instead of struggling with kites and flatlines, we dropped live baits on wrecks and found one wreck loaded with big amberjack. They dont call these reef donkeys for nothing and when you put them on a wreck, they fight even harder. We managed to catch some huge AJs and everyone had a blast. The next day the wind came up quite a bit and the current started going and by the end of the day we caught 9 out of 12 sailfish and a few nice dolphin. This definitely goes to show you how the conditions will dictate what the fishing will be like.

The past few days the sailfish bite has definitely picked up and I know I say it in most of my past reports, but the bite should remain strong well into spring. These sailfish come into our Florida waters in early fall and migrate south through the winter and eventually leave in the spring. Eventually the have to leave and when they do they will be passing Miami on their way out. Just like last year when the sailfishing was a bit slower than normal during the winter, the spring was absolutely on fire. I am sure the same scenario will happen this year with the sailfish bite exploding in April and early May.

Besides sailfish, we are catching some very good size mahis on the edge. Fish from 5 to 30 pounds are being caught. We are also starting to see the big kingfish on the reef. My customer from yesterday went fishing the day before and showed me a picture of a huge kingfish he caught. It was every bit of 60 pounds and probably closer to 65 pounds. We will start seeing more and more of those kings this month and next.

Lastly the next fish to appear will be the blackfin tuna and April and May are the two best months for that fish in South Florida. Last year we had the best blackfin bite that I have ever remembered. I am hoping for the same this year.

With all that said, now is the time to book those spring trips. March is completely sold out and April and May are about ¾ full. Now is also the time to look at trips for the summer in the Bahamas chasing yellowfin tunas, mahis and marlin, or bottom fishing for muttons and yellowtail snappers. The Bahamas is a blast and a great way to relax and catch lots of fish. So look at those calendars and lets set up a trip! 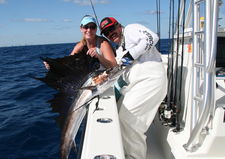