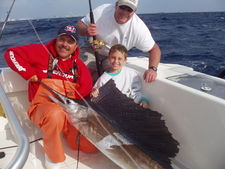 What a great two weeks of fishing. We are getting into spring and in my opinion springtime offers the best fishing of the year. First, sailfish have been around and in very good numbers. Most importantly, they have been very consistent. We have been averaging 4 to 5 sailfish per day and as many as 8 per day. The bite has changed in location anywhere from Miami Beach all the way down to Triumph Reef. If it is sailfish you are targeting, you really need to find the blue water and north current. One trip that stands out is when the sailfish bite was on and we got to get a 9year old boy his first sailfish, and then some more after that. It is always exciting to see a youngster catch his first billfish!

Kingfish have also started to show up. We had quite a few days where we caught our limit of kings and yesterday, we caught our biggest king of the season which weighed in at 41 pounds. The king ate a flatiline on a spinning rod and was quite a fight. If the king was any longer it would have surpassed the 50 pound mark as it was an incredibly fat fish.

The dolphin fishing for the past few days has been nothing short of amazing. There have been tons of dolphin charging hard to the south. When the dolphin schools scream by, every bait gets hit. The good news is that most of the dolphin are good size schoolies from 5 to 15 pounds, with a few 20 to 30 pound fish mixed in. When you are strictly sailfishing, the dolphin can become a nuisance but what a great nuisance to have. There were so many dolphin around yesterday, that we spent half the time fishing with half a spread out. As soon as you would get 3 or 4 baits out, the dolphin would eat everything in their path. The action with dolphin, sailfish and kings was so non-stop, that I dont think I had a break to get anything to eat or drink until well after 2:00pm. It was non-stop incredibly good fishing.

Last week we also managed to catch a white marlin well over hundred pounds. It ate a threadfin herring kite bait intended for a sailfish. It was quite a fight on 20 pound test and lasted one hour and ten minutes. It just goes to show you, that you never know what you will catch while live baiting off of Miami.

March is almost gone but April offers great fishing. We should start to see some blackfin tunas real soon as well as some big kings, dolphin and more sailfish. I do have some days open in April and May, and like I said earlier, these may be the best months to fish in South Florida, so give me a call and lets set up that trip.