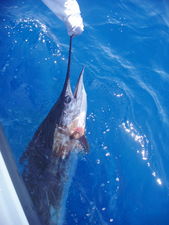 The wind has finally laid down and we managed to get in most of our trips. The wind dying down is good news as I am heading over to the Bahamas to target the yellowfin tunas and calm weather will be nice for a change.

Back here in Florida, we did fish the reef for a couple of afternoons while it was still blowing 15  25 mph and did well. Our first trip we caught 5 blackfins, a few kings, some dolphin and a couple of sailfish. Our next trip we caught 3 out 5 blackfin tunas, a sailfish, and some dolphin and kings. The blackfins this time of year are in the 25 to 35 pound range. If you are lucky enough to get a bunch of bait, then nothing beats the sight of live chumming and watching the blackfins tearing through your spread. It is quite the sight to watch as a blackfin explodes on your kite bait. This is hopefully only going to be topped while we are in the Bahamas and watch the big 100 pound yellowfins crashing on our baits while we are there. The kings have been on the small size with most of our kings between 5 and 10 pounds.

We have also stared our dolphin trips where we run out into the Gulfstream and look for birds and debris. Lately most of the dolphin that we have been catching have been under frigate birds. The majority of the action has been from 500 to 900 feet of water. This past week we had two dolphin trips and limited out on our first trip. We caught a whole bunch of dolphin and released even more. Our second dolphin trip didnt goes as well but we still managed to catch enough for dinner and then some.

We have also gone swordfishing twice and were lucky enough to catch one fish (released) one night and then last night we never had a bite. According to my logbooks, June, especially early June, can be a slow month for swords, which is OK since I will be gone for the majority of the month. The swordfishing picks up in July as the squid move in and the past two years, August has been a good month and has produced a lot of large fish. In my opinion in respect to calm seas and good swordfishing, July through November can be ideal months to target swordfish. I still have some dates open for swordfish tournaments and have listed them below. If you are interested, please give me a call.

While in the Bahamas, I hope to have e-mail service, but will definitely have cell service. If I dont answer your e-mails, then please give me a shout on my cell phone (number listed below).