Firing On All Cylinders 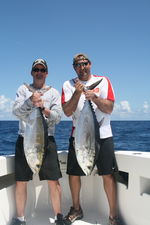 The fishing off of Miami has been absolutely excellent. We have been extremely lucky to have everything biting. Typically this time of year, the majority of anglers are in the Gulfstream and looking for dorado. We have done quite a few of these trips and have caught dolphin on every trip. Most of the fish have been schoolies, but a few bigger (30  40 pounders) have been caught as well. There is a minimum size which is 20 inches from the fork of the tail to the lower jaw. These are actually pretty small dolphin and it is best to leave the smaller ones alone. If we catch a few fish that are right at that size or smaller, I usually leave that school because the vast majority of that school will be of the same size. It is best to leave them alone to grow and find a different school with bigger fish.

Along the edge, the fishing has been very good. There have been lots of kingfish, quite a few blackfin tuna and an enormous amount of bonito. When the conditions are good with blue water and north current, we have had a few sailfish around as well. The other day we actually saw a total of 7 sailfish in one day and caught 3 of them. The water has been extremely calm and it is awesome to see a sailfish come up with his dorsal out of the water, tracking the bait down before he eats it. We also caught a sailfish that day that had absolutely no bill on it. It just goes to show you that they can survive just fine without a bill. This was a full grown sailfish that had plenty of energy and fight in it.

Even further inshore, the tarpon fishing along Government Cut has also been great. We had a few nights were we caught 3 or more tarpon per night and caught at least one tarpon on every trip. The tarpon have been eating crabs which I think give you a better hook up ratio. We have been altering our starting times and have caught most of our fish right at dark or just after dark. The tarpon fishing should stay good for anther couple of weeks and then slow down considerably.

I havent had any sword trips lately, but the reports I get are promising. A friend of mine caught a big fish at 550 pounds just a few days ago. This swordfish was caught during the day. I have also heard a few other fish caught during the day, but I also know that some guys didn't get any bites, but that is fishing and you certainly cant catch them from the couch. The night fishery is not as popular as it used to be, but the die hard guys still going are catching a fish or two at night. With as hot as it is during the day, the night fishing sound s pretty good.

I do have a full week booked with some day and night sword trips as well as a trip to Bimini, so I should have a really good report when I get back.

I have plenty of dates open in July and August so now is the time to get in your trip. Be it dolphin in the Gulfstream, swords day or night, fishing the edge or going to the Bahamas- book now the fish are BITING.

P.S.  No oil in our waters and none are forecasted either.