Big Fish on the Double D 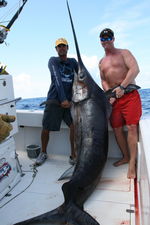 Whenever we go daytime swordfishing, we are hoping to catch a big swordfish. A fish over 300 pounds is awesome, but a fish over 400 pounds is intense. Last Friday was that day. We started on one of our spots and made a drift with no success. I picked up and ran to another area that had been producing. We didnt get any bites on our first drift. Being that this area had been so hot lately, I decided to make another pass. At the very end of our drift, we noticed a slight shake in the rodtip. The rodtip then bounced a few times, we were getting a bite, albeit a very subtle one. We manipulated the rod a bit and sure enough the rod gets a load on it and the fish is on. As most big fish do, she dogged us on the bottom for a while and once we broke her of the bottom, she was swimming the lead up with no problem. Occasionally she would stop and take some line and then hed back up. All the signs were there that this was a decent fish. We got the fish to the top and she started racing on the surface. I had both motors in gear and going almost on plane and I couldnt keep up with her. Eventually she settled down and went back towards the bottom. We got her up again and we played this game of up and down a few more times. Eventually we got her next to the boat and saw what a great looking fish she was. With 4 guys on board, we had no problem lifting her over the gunwale. She taped out at 97 inches (LWJFL) and weighed upwards of 450 pounds. It was high fives for everyone and was a great team effort. With a fish that big, we headed back in. Fish that big do not come very often and I am extremely thankful when they do and everything turns out right.

The next few day trips also produced swords, but none as big. We did have a day where we caught two fish and both jumped. To see a swordfish in the day is cool, but to see one jumping is an added bonus. Our next trip, the bite slowed down. We had a 12 hour trip where we hooked a thresher shark and fought her almost to the top. We didnt get any day sword bites that day. We settled in for the night drift and had two fish on but pulled both of then off. Tomorrow we have another 12 hour trip, so hopefully the bite picks back up.

I havent fished on the edge much this past week, but there are kingfish as well as some sailfish around. The sails have been both on the edge as well as offshore. This is the time of year that you may be lucky enough to find sailfish offshore balling sardines. This is definitely a cool sight to see sailfishing balling bait and taking turns going into the bait school to grab a few morsels.

The next few weeks are extremely busy with a variety of reef trips, day swords and evening sword trips. Im sure the sword bite will pick back up and well be ready for them.