Fish til You Drop 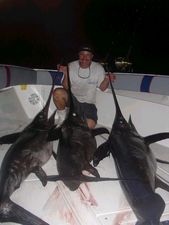 Sorry for the long wait in between reports, I try to update weekly, but it has been pretty busy. To start with, a charter fished the Fort Lauderdale Billfish Tournament with us a week ago. The sailfishing was a bit slow, but we managed to hold on to 9th place. After day 1 of the tournament, we were in second place with three sails, only beaten by time by another boat with three sails as well. The second day we missed on and caught one, which dropped us to 5th. The third day is a short day, and we managed not to catch on, so we dropped to 9th. The lead boat had 6 sailfish, and we had 4 sailfish. The good news is that we made some money for 9th place, but also made a bit more money in the funfish division. We caught some kings that earned a second and third place in the funfish divisions. On the third day, we caught a kingfish at almost the end of the tournament and we were way north of Lake Worth. We only had an hour to get back to the inlet or our fish would not count. Those new Mercury Verados did their thing. Close to 50 miles back without missing a beat. As a matter of fact, they have been performing flawless since I got them.

As far as the local fishing, there have been some sails around, and with this cold front today, I would predict that the sailfishing should get good again. There has also been some dolphin on the edge and some kingfish on the reef.

Swordfishing at night has been outstanding. We fished the last two nights and went 4 for 6 one night and 3 for 4 the next night. It?s a great night when you catch one, but when you catch 2, 3, 4 a night, it is GREAT! The fish have been of decent size too, with a few around 150 pounds. We had one night a few weeks back that we went 3 for 4 and every fish was between 140 and 200 pounds, and we were back to the dock by 11:00. Now that is good swordfish action! The swordfishing should remain very good for the winter months; you just have to watch for a break in the weather.

A couple of thing we need to mention. First, holiday season is rapidly approaching and if you have that special someone that loves to fish, and you just don?t know what to buy him or her, give them a gift certificate for a fishing trip. I have sold many of these in the past, and they are a great gift. What could be a better gift than a day of fishing? Secondly, our 12-hour sail/sword combos are starting to take off. We have booked quite a few. For the hard-core guys, this is the trip. Sailfish in the afternoon, followed by swordfish until midnight. The potential of two billfish in one day while still in the United States. Thirdly, the holiday season is approaching and the weeks around Christmas and New Year?s are for us guides very busy. If you have friends or family coming to town or will be visiting Miami, book now, as those days are starting to book up.

That?s it for now. Happy Thanksgiving to everyone, and we?ll see you on the edge!