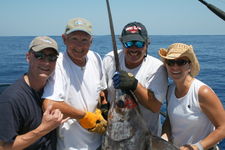 We have had some close calls with hurricanes this past month, but luckily all 4 hurricanes have avoided us. I wish the best and a speedy recovering for our fellow friends in Texas and Louisiana. The good news is that the hurricanes have avoided South Florida, but on the other hand, they have come close enough to stir up the seas. When the seas have died down enough to venture offshore, the slow economy and the media coverage of all these hurricanes has kept everyone at the dock. September is traditionally a slow month for the charter fleet, but this year has been extremely slow. I hope thing pick up soon as there are a lot of charter boats in South Florida that need the business (myself included).

On a good note, I did managed two trips between Hurricane Hanna and Hurricane Ike. Hanna had gone up the Atlantic side of Florida and moved passed us quickly. I had an offshore trip for daytime swords planned with a group from New England. The father and son had owned a charter boat up north and the father had actually commercial fished for swordfish with a harpoon many years ago. Our job was to catch these guys there first daytime swordfish on rod and reel. We went offshore and found some pretty cool swells that were left over from Hanna. The swells were big but spaced very far apart. We have more chop in the Atlantic compared to swells and it was actually pretty cool to see and run through the swells.

We made our first drop and after 20 minutes or so had our first fish on. After a short fight on the bottom, the hook pulled, so we reset. Our second drop we got a quick bite but no solid connection. We reset again and our third drift produced nothing. The conditions still looked good and I was still quick faithful that we would get a daytime sword before the end of the day. About 15 minutes into our fourth drop we hooked a fish on the bottom. The fish fought hard on the bottom until we started bringing him up. For whatever reason, these swords dont seem to fight that much in the middle depths and sometimes you arent quite sure if they are still on the line. The swords swim up and you have to keep up and reel in the slack quickly. About 600 feet down we started to feel the sword again and got him up to the surface. As I got the wind-on leader in m hand, I could see the sword swimming a good distance under the boat. I leadered him up and everyone got to get a great look at a swordfish in the water during the day. One of the customers got a good picture of the sword in the water that hopefully they will forward to me so I can post it on the site. The swordfish wasnt a monster but a solid 150 pound fish that was also a pumpkin (orange colored meat  very good eating).
I was ecstatic to get these guys a swordfish during the day. We made 2 more drops and then called it a day.

Luckily I have 4 trips this week and we will be swordfishing for at least a few of them We are going to start off trying for a daytime sword, followed by one at night and since it is 4 days with the same group, who knows what else we are going to target. Im looking forward to spending some time on the water doing what I love  FISHING!