The fishing is definitely heating up. We did a variety of different trips including a couple of daytime swordfish trips, a wahoo trip to Bimini and quite a few kitefishing on the edge trips in Miami. Our wahoo trip to Bimini was very successful. My good customer Roger was flying his family over to their vacation home in Bimini and my mate and I were going to run the boat over and do a couple of days of wahoo fishing. All week it was blowing SE 20 to 30 mph and our trip was looking suspect. The day before the trip they downgraded the forecast so it was a go. Unfortunately the morning of the trip they upgraded the weather forecast again and it was blowing. The boat was loaded though and one of the reasons I bought the 37’Seavee was to be able to make crossings like this. With the wind blowing 20mph out of the E-SE the seas were rough, but the SeaVee did her job and got us there safely and comfortably. Quite an impressive boat. Once we were there the wind died a bit and by the 2nd day it was very nice. We spent two days hi speed trolling for wahoo and had 6 bites the first day and 8 the second day. The fish were mostly 30 to 40 pounds and although most of the fish were singles, we did have one tripleheader on the second day. The first run of a wahoo while high speed trolling at 15 knots is impressive, but can you imagine three reels going off at the same time — That was a lot of fun! 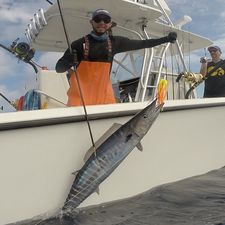 We also did a swordfish trip during the day this week. We managed to catch and release a small swordfish. It was on our first drop of the day. We did 4 more drops to no avail, and then decided to come back in on the edge and try for a sailfish. Within an hour we caught a sailfish on spinning tackle so we accomplished our goal and caught two different species of billfish in one day. Having the ability to do is what makes South Florida so special. Since our trip I have heard of at least two really big swordfish caught with the biggest one at 550 pounds. It definitely
seems like the bite is going off.

We have also done a number of sailfish trips and caught sailfish on all our trips. Our best was 4 for 6 on a half-day trip, but there have been some days that we were at the dock that multiple boats had 6 to 12 fish a day. As I had mentioned in my previous reports, March through May are going to be great months for sailfish. We are already starting to see more freejumpers in the area and are hooking more multiples. Once you start hooking more than one sailfish at a time is evidence that the fish are pushing through and there are more sailfish in the area.

April is coming up and April and May are my favorite months to fish in South Florida especially for variety of species. Sailfish will be here in great numbers, the big mahis will show up on the edge as well as the big kingfish, which we are starting to see already. April and May also bring the big blackfin tunas which I just cant wait to see. The daytime swordfishing is also very good in April and May. I still have openings so give me a call and lets set up those springtime trips!