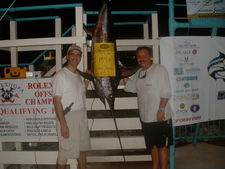 Our luck has continued and we ended up winning the Florida Swordfish Series. This series is based on the total points from the Islamorada Swordfish Tournament and the Miami Swordfish Tournament. As most know, we won the Islamorada Tournament with 700 points. This past weekend was the Miami Swordfish Tournament and we got third place weighed fish and added another release. That brought our total to 959 points which earned us first place. I was entering the Miami Tournament with hopes that we could keep our lead and win the Series. We ended up doing just that, but we really could have won the Miami Tournament. The first night we had a swordfish to the boat, pulled the lead and light off the leader, so we did have the leader in our hand. This is an official catch, but with the fish still down 20 feet, we couldnt get a picture. Unfortunately the angler made an error and the line parted on the tip. If that fish was truly 200 pounds, that would have been enough for first place and definitely enough for 2nd place. The next night was the heartbreaker though, as we had another fish to the boat, light and lead were taken off the leader, so the leader was in our hands again. The rules call for a release to be valid if you get a picture of the fish with that nights T-Shirt in the picture as well. The fish was still 20 feet deep and as the sword surged forward, the angler hooked up fell down and the hook pulled. This fish was bigger than the previous nights fish and was in everyones opinion a solid 300 pound sword. That would have definitely landed us first place as well as biggest fish. What matters in these tournaments is that you get the big fish in the boat. We didnt do it. If it wasnt an IGFA tournament both those fish would have been darted and story over, but so be it. We still got 3rd place heaviest fish and most importantly, we won the Series.

The swordfish continues to be the best bet right now, but we are going to start seeing more sailfish on the reef as well as offshore in the next few weeks. The wahoo in Bimini should also start to make a showing in the next month or so. Now is the time to either book your fall swordfish trip or start booking trips for sailfish season. We are officially booked for all the sailfish tournaments this year, but we have plenty of weekday and weekend dates still open. Give me a call and lets go catch-em!