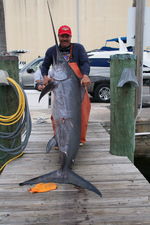 I have done a variety of trips in the last few weeks, with most of them being sailfish trips. This is a great time of year for sailfishing in Miami and I am ecstatic to say that we have caught at least 2 sailfish on every single trip we had and for the most part have been averaging 5 to 10 sailfish per day. That is good sailfishing, but I am really expecting it to get even better as we get farther into winter. We should hopefully see a few double digit days in the next few weeks and going forward from then. The sailfish having been changing in depth, but for the past week or so have been shallower than normal. We have been catching them as shallow as 80 ft of water and have been targeting them from 90 to 110 feet.
I also expect to start seeing bigger pods of fish moving through as well. We have only had one triple, one quad (4 at one time) and quite a few double headers, but for the most part, the majority of the sailfish we have caught these past few weeks have been singles. As bigger pods of fish move through, we will start seeing multiples and that is how you can get into those double digit days.

Besides sailfishing we did one evening swordfish trip and one daytime swordfish trip and both trips were successful. The evening trip we had two brothers out and caught one swordfish at about 90 pounds and battled another much bigger fish for over and hour, but unfortunately we didnt get it to the boat. Either way, it was a great night with nice customers on board. Yesterday we did a swordfish trip and caught two daytime swordfish. The first fish was about 90 pounds again, but the second fish was around 280 pounds. The second fish we caught at the end of the day. We got her on the leader fairly quickly, but this fish then decided to play a bit harder. She put up two magnificent jumps where she went completely out of the water right next to the boat. In all my years, I dont think I have seen a swordfish jumps so high. If only I had my camera ready. She fought hard for over and hour and a half, but we did finally get her boatside. It was a great fish and a great fight.

Go out there and catch them up.