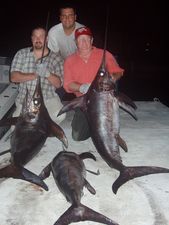 Besides one day last week when the wind was out of the west, the fishing has been very good. Same as from the last report, the sailfishing remains very good, especially for this early in the year. Anywhere from 2 to 4 sails per day is common, and the best is yet to come. There has been plenty of bait around, both in the bay and in the ocean. Netting pilchards has been pretty easy. We have had good water quality on the edge, with clean blue water anywhere from 200 feet to 90 feet in depth. Besides the sails, this past weekend (especially Saturday) there was a tremendous amount of dolphin caught. While kitefishing for sails, the dolphin would hammer every bait, and it was not uncommon to have 6 dolphin on at one time. They were coming in waves. Great action, although by Sunday it slowed down a bit. We still managed to catch more than a few. There are also some kings around. Depth has been varying but anywhere from as shallow as 50 feet all the way to 160 feet for the kingfish.

We also had some sword trips this week. One got postponed to next week due to the heavy rain, hail, and tornado warnings we had last night. The one trip we did do, we had a superb night. The night started with a bite on the tip rod, which we missed. Then the long jug goes off and it was a screamer. Line was peeling off at an alarming rate. About 300 yards was out, and the fish started charging towards the boat. We stayed tight, but the hook pulled. No fewer than a few minutes later, the tip rod goes off again, and this time we landed our first fish. Not tremendous in size but a few inches above legal. We reset our lines, and the tip rod goes whacked. I reel it up hoping the fish would follow it up, and it did. This fish was plenty good in size. Estimated by everyone on the boat to be a solid 200 pound plus sword, I baited him on the surface and we got to watch him eat next to the boat. What a sight! With the fish hooked solid, we fought him for a while. The sword had half a spool of line out, when the line just parted in the middle. It might have hit one of the other lines out already or may have been a bad spot on the line, but that reel was taken out of commission and since then we put new line on the reel. While we were fighting that sword, another swordfish came into the light next to the boat, but wasn?t interested in anything we had to offer. Feeling a bit dejected we were now 1 for 4. After that fish we caught another sword, which we released. Now we were 2 for 5. We picked up and made another drift and we caught two more swords, one went well over 100 pounds and the other just under 100. We ended up catching 4 out of 7 swordfish in one night.

This is the time of year that both the day fishing starts heating up and the swordfishing can go off any day. Give me a call and lets set it up.