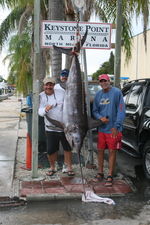 If you enjoy dolphin fishing in the Gulfstream, then you need to get out there now. The dolphin fishing for the last two weeks has been about as good as it can get, I was lucky enough to have charters almost every day this past week and we caught dolphin on every trip. Most of the schools of dolphin have been under birds but with flat calm seas all week, there has been a build of Sargasso weedlines and some floating debris as well. The individual fish in each school can vary in size, but most of the fish are well above the minimum size. The size of the schools has been impressive. Most of the schools we found this week had well over 100 fish per school. The schools of dolphin have been anywhere from 7 to 20 miles offshore. With the rising costs of gas, I have not really seen many boats out there. In a way thats OK since the fish havent been harassed by a lot of boats and are eager to eat just about anything you throw at them.

I have also done some daytime swordfishing. We have had a lot of bites each trip, but have not been able to keep them on for long. A good friend of mine asked me to run his boat one day last week and we did catch a nice sword in the 200 pound range (210 pounds at the marina scale). I also did hear of some massive swords caught at night. A friend of mine Cliff and his crew caught a 480 pound sword last weekend during a sword tournament. Congrats to them and especially for catching a sword that big during a tourney. I also heard of another fish in the 400 pound class caught a few days later. If you have never been swordfishing or havent gone in a while, I think the upcoming week we are going to see a few big fish again. Nothing can really beat going swordfishing at night in calm seas, lots of stars, with good friends while being TIGHT on a big sword!

The rising cost of gas has definitely started to affect the charter boat industry. Luckily I have stayed busy, but even my bookings in July and August are down. Some boats have chosen to increase there charter fees due to the rising gas. I have kept my fees the same and will hopefully be able to keep the rates the same for a while. I have plenty of dates open these next two weeks and if you like to catch dolphin, this is the time to book a trip. Also if swordfish, either day or night, is a fish you want to scratch off your list, give me a call and lets set it up!