The new Double D has arrived but before we let go of the old Double D, she still had lots of luck in her and we did really good on our past few trips. We did a few more trips on the edge and were lucky enough to catch a few more sailfish. Although it is summer and not really sailfish season, we still managed to catch sailfish on all our trips but one. The one thing this boat did was catch lots and lots of sailfish and Im sure the new one with the tower will catch even more. Most of the sailfish were caught off of Key Biscayne with live baits either on the kite or on the flatlines. Thread herring were the bait of choice. 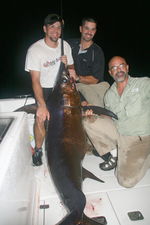 We also did a few swordfish trips and we caught swords on all our trips (three trips in a row) and had one outstanding combo trip. The combo trip started off in the daytime and on our first drop we hooked a very nice sword, but managed to pull the hook about 2/3 of the way up. We also hooked a thresher shark that worked the poor Daiwa reel into submission. One thing about threshers is that they can really tear apart a reel. It is a constant fight from the bottom all the way to the top. Big eye threshers are protected so you have to release them which we did, unfortunately about 100 yards from the boat. We then continued into the night portion of our trip, which Ill get into later.

Earlier in that week we had two evening swordfish trips and released a small swordfish on our first trip. The second trip we caught a swordfish close to 100 pounds that the customer kept. Prior to fishing with us, Pete had always wanted to catch a swordfish and had a fished on a few other boats but didnt have muck luck. I was really hoping to get him his first sword and even though we had a decent wind out of the west which is usually not the best wind, all the other conditions were good. After setting out or baits the wait began and about 10:00pm we had a good bite on the shallow tip rod with a live bait. Pete who is a basketball player quickly went to work on the fish and after 30 minutes of so landed his first swordfish. Happy with his first sword, he called it a night and off we went back to the marina.
On the second half of the combo trip where we hooked the thresher shark, we set out our baits in an area close to where we had been fishing the past few nights. I had with me Jesus, his brother, Ricky and Jesus dad. This crew has fished with me several times and always had great luck. We have daytime swordfished with them and caught 4 swords in one day as well as fished the Bahamas with them several times. We had a west wind again, but very light and had a very decent drift going. We ended up catching 3 out 4 swords. We released a small swordfish around 60 pounds and boated a 240 pounder as well as a 200 pounder. Catching 3 out 4 swords is awesome but the size of the fish made it a stellar night. It was definitely a lot of fun catching them on manual rod and reel and actually have the angler fight them one on one. Although day time swords are usually impressive in size and are awesome to see during the day, the night time fishery is great because they really fight and it is all on manual tackle.

With those trips we ended another era in the Double D chronicles and turned the boat back to SeaVee to get her ready for her next customer. With that said, the next report will have more info about the new boat.

September and October are two of the best months for swords, especially day time swordfishing. We are also getting ready for sailfish season which should go into high gear in the next month or so. Call now and reserve your dates for swords and get your planners out and start looking at dates for winter sailfishing and winter wahoo fishing in the Bahamas.