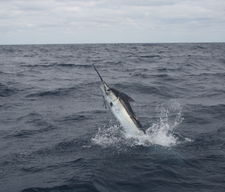 What a great two weeks of fishing since my last resort. We have had some incredible days and some very happy (and sore) anglers. The weather has been windy at times, but we have braved it out and have been rewarded practically every trip.

Lets start with swordfishing. We have done a few night trips for swords as well as quite a few daytime trips. By far the daytime trips have been more productive. What is amazing is the size of the daytime fish. We recently caught another fish over 500 pounds as well as couple over 400 pounds and a few between 200 and 350 pounds. Some of these fish have been released as well. We still do not know a lot about what these daytime swords, but luckily I have a client that has had some tremendous success with swordfish and is also enthralled with this fishery. We are in the process of purchasing a satellite (PSAT) tag. I am going to donate the time and boat, and my client is buying the $4000 tag. Along with scientist from UM and NOAA, we are going to hopefully tag a big swordfish caught in the daytime. This will provide extremely valuable information. For one, we will know if these fish are residents, or are they simply passing through. We will also know if these fish stay on the bottom all day and night or do they rise to the surface at night. The amount of information gained by a PSAT tag is incredible.

Besides swordfishing, we also went wahoo fishing in the Bahamas and also did a few trips on the edge for sailfish. The wahoo fishing was a lot of fun. I havent gone high speed trolling in quite a while and thoroughly enjoyed it. We caught a half dozen wahoo out of 9 strikes in a little bit over an hour and a half. The wahoo were from 30 pounds to 55 pounds. Theres nothing like watching the rod bend over and the drag sizzling out as you are trolling at 14 knots with a big wahoo at the end. Whats more impressive is the double and tripleheaders that you often get. From now until March or so is a great time to go wahoo fishing in the Bahamas. Not only are there less people in the islands compared to the summer, but the fishing regulations have been changed back to our favor.

As I mentioned earlier, I have also fished for sailfish on the edge. The big push of sailfish hasnt made it down to Miami yet, but I guarantee you that they are on their way. Even without the big push yet, we have been catching anywhere from 1 to 3 sails per trip. Besides the sailfish, there have been decent size dolphin as well as some kingfish.

Now I have saved the best for last. Last weekend I had a group of anglers that wanted to try to catch a swordfish during the day. We were also targeting the swords with conventional reels, which we have already caught a few with. Just as a note, on every daytime swordfish trips the anglers are given the option to either fish with electrics or fish with conventional reels. We have caught swordfish with both methods and I am confident in both our techniques. The decision is entirely up to the clients. We made our way out to the sword grounds. Our first drop, produced a strike, but he came unglued on the way up. Our second (maybe third) drop produced a super fat 180 pound swordfish. Everyone was ecstatic with lots of high fives going around. We had a drop or two with one more missed bite. We dropped again and more than halfway down, we saw the rod bend over several times. It looked like a big swordfish was whacking the bait with his bill. My angler, Matt, got on the rod and cranked like mad. He got tight and fought this fish all the way up. The line started scoping to the top and I start yelling telling everyone to get the cameras as we are about to see the swordfish start jumping. With the line up on the top now, we saw her tail then her dorsal. It reminded me of the 510 pounder we caught last month, except this time there was something different about the shape. I couldnt quite figure it out, when all of a sudden this fish started greyhounding on the surface. It wasnt a swordfish; instead it was a 350 pound blue marlin! From that point and for the next 20 minutes this fish tore up the surface. I have so many pictures of this fish in the air, it is unbelievable. Matt stayed on her and I was on the wheel the whole time. We got her next to the boat and saw that see was badly wrapped in the line. My mate Freddy, did a great job getting her unwrapped and then after a short amount of time pulling her in the water to revive her, she lit up and swam away strong. This was definitely not we expected and was a fish of a lifetime. Matt was so excited and taken by the moment that his hands were literally shaking for the next two hours. We made one more drop and we caught a deepwater barrellfish. After that, I was calling everyone on the VHF trying to get a hold of either a bait boat or one of my buddies to try to get some smaller live bait so we could try for a sailfish on the edge. That would have given us a Grand Slam (Swordfish, Blue Marlin and Sailfish). We couldnt locate anybody and decided to hed back to the dock. I did catch a sailfish the next morning, so in a way we got a belated Grand Slam with three different billfish in 24 hours.

Like I said, this has been a great two weeks of fishing for me. If you are interested in trying for your own fishing adventure, please give me a call and let set it up. We work hard to get everyone on fish and appreciate every trip we have. Regardless of the fishing, I am sure youll have a great time with friends on the water!