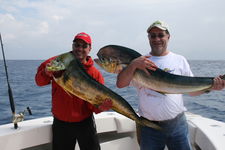 Sorry for the long delay between reports, but since my last report I have fished every single day but one. The good news is that the fishing has been good. We have had a very steady sailfish bite. When the conditions have been good with north current, blue water and some wind for the kites, the sailfishing has been great. We have had a few quite a few days with double digit releases and our best day since the last report; we caught 15 sailfish in one day. Even when the conditions are tough, we are still catching a few every trip. We fished two sailfish tournaments in the last month. Both were one day tournaments. The first one was the World Billfish Challenge and we ended up catching 7 sailfish. It wasnt enough to put us in the top 10, but we still had fun, especially when we hooked a quad in the middle of all the other boats. The next tournament was the Fisher Island Sailfish Tournament which we won last year with 18 releases. The fishing this year was a lot slower, but we still got 2nd place with three sailfish releases. I anticipate the rest of the year; the sailfishing will remain strong well into May.

Besides sailfish, we have also found some nice dolphin. Besides the smaller schoolies that normally swim up to the kite baits, we have caught several fish between 20 to 50 pounds. We went daytime swordfishing the other day and saw three large dolphin cruising by. We caught two of the three fish. They were 25 to 30 pounds each. We actually fought the bigger bull of about 45 pound for over 30 minutes. We had it on the gaff when the big fish jumped off the gaff and broke the line. It was a bit but heartbreaking to lose a fish of this caliber that we fought for so long, but we did catch the two others and also caught a daytime sword at the end of the day. As far as swordfish, I did one other daytime trip since the Last report and we did catch one then as well. We also did one nighttime trip and we caught a swordfish that night as well. We have another nighttime trip tomorrow night, so hopefully well get lucky again.

We are now starting to get into the best time of year to fish in South Florida. Besides the consistent sailfish action that we have had, we are now going to start seeing more kingfish and bigger ones as well, the blackfin tunas will show up and so will the larger dolphin. Besides those three, we will have better shots at cobia and possibly wahoo as well. The bigger amberjacks will also show up on the wrecks. This is my favorite time to fish as you can catch some fish for dinner as well as some sailfish to release.

With that said, now is the time to book your spring trips and also to book your summer trips for the Bahamas. I will start heading back over to the Bahamas next month and will hopefully spend some time there this summer. The fishing rules have been changed back and are better suited for the vesting anglers.