A Lot Of Great Fishing

It’s almost the end of June and I can tell you for the most part, I have spent almost the whole month in the Bahamas. To start, we did our annual trip to San Salvador, Bahamas on the 39 Diesel IPS Drive SeaVee center console. This year we had absolutely gorgeous weather which is a huge plus especially for getting there and back since it is 355 miles from Miami and it can definitely get rough once you get into Exuma Sound and then out towards the east. The fishing started slow but ended strong. The first few days we saw a dozen or so blue marlin but didn’t get a lot of bites out of them or the bites we did get were definitely not very aggressive. It still gets the heart going to see a blue marlin behind your teasers and lures. Towards the end of the trip the blues got more aggressive and we ended up catching a few blue marlin, a few white marlin and even a sailfish. We also had numerous big dorados up to 45 pounds. I can tell you one thing, I am very tempted to go back for the July moon. Any interests?

Once we came back I did a couple of mahi trips back home. One was good and the other one was slow but we did come back in to the edge a catch some kings, tunas and bonitos.

Then it was back over to the Bimini where the plan was to do some deep dropping and some yellowtail fishing. The first day we were going to deep drop but a stiff west wind made that very hard and after making only a few drops, a wicked squall rolled in and we had to high tail it back to Bimini. The second day the wind was still kicking a bit, but we opted to go to the Gingerbreads for some yellowtail snapper fishing. It was a good move as the yellowtails were biting and we soon had our limit. We left them biting and headed back to Bimini. The last day the forecast turned towards the worst with heavy NE winds forecasted and since we had a family on board with a small child, we decided to be safe and hed back early ahead of the front. It was a good idea because by afternoon time it was already blowing.

The next day we had a trip here, which was supposed to be a mahi trip, but with the wind still kicking 20 knots out of the NE we decided to fish the edge instead. That proved to be a good move as we ended up catching 3 blackfin tunas, a sailfish (saw three others), a good amount of bonitos and some cudas. It was non-stop action for most of the day.

The next trip was a daytime swordfish trip and the wind subsided and actually made it very nice. Our first drop we didn’t get a bite. On the second drop as we were setting out the second rod on a buoy, we got a bite on the primary rod. After reeling and dropping the bait to get a more aggressive bite, the rod bowed over and it was game on. The fish fought hard on the bottom and once we were able to get straight up and down on her, she started to rise, slowly at first and then rapidly. We got her all the way to the lead, removed the lead and got to see here. It was a gorgeous fish in the 200-pound range. She was not done and pretty soon was back down 350 feet. We played see-saw for about an hour and the angler got here tired out and in to the boat she came. She taped out at 76 inches (JJFL) which would put here around 240 pounds, but she was a bit skinny so I would say 210 pounds We made another drop and got a faint tap at the end of the drift but no takers. We made our 4th and final drop and as we were getting ready to reel the rods in, I decided to stay for just a bit more as I was going over and area my good friend Bobby Boyle and I had fished a few years back. It was a gully on the bottom with only a 20 to 30 ft. depression but we caught a nice fish there before. As we entered in the gully, we got a bite. Again we manipulated the bait to get a more aggressive bite and bam the rod bows over. A lot of drag initially and soon we were straight up and down on her. The rod then went completely slack and we knew we had another good fish on. Soon enough we had here near, took the lead off and she swam by us to show us who is boss. We could all see she was way over the 300-pound mark. After 40 minutes of back and forth from 500 feet deep to the surface several times it was time to apply a little extra heat. The first time I saw here I could see the hook was really well placed in the corner of her mouth so I took the calculated risk to wire here in on the long wind on leader. After some pulling, Leo got a harpoon in her and then we got some gaffs and before you know it she was on deck. This fish measured out at 93 inches (LJFL) but again she was skinny so I would say she was right around 400 pounds or slightly less. Now it was back to the dock. The charter had come from Michigan by car so off they were to the local Wal-Mart to buy some big coolers. It was a great day for daytime swordfishing and even though the fish fought hard, we fought harder! 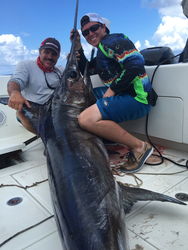 The next day we had the same group but opted to go mahi fishing. We ended up catching a few dozen mahis and keeping a bit more than a dozen as they already had enough fish to feed half of Michigan. We also saw a free jumping sailfish while mahi fishing and baited him up and had him on, but the hook pulled.

Our next trip is back to Bimini for some yellowfin tuna action and then followed by some mahi trips, day sword trips and a trip or two on the edge. Summer is usually when it slows down a bit business wise but that has not been the case so far. Hopefully that continues so if you haven’t booked your summer trip yet, lets do it before time runs out!