Sorry for the bit of delay between reports, but I have been fishing everyday and trying to get caught up. The sailfish action continues to be great. We did have two days were the bite for sails was non existent but we did manage to catch quite a few dolphin, some decent kings and some small blackfin tunas on those days. The sailfish action was slow those days because we had practically no current and the water was pretty green. The good news is that we now have good current again and some decent looking water. Our best day since my last report was 12 out of 18 sails and that was on a half day trip. We have been averaging 4 to 6 sails a day and are now starting to see more dolphin and steady action on the kingfish. We are also seeing blackfin tunas on practically a daily basis, but the tunas have definitely been on the small side. We should see the bigger tunas very soon and am excited to get the bigger blackfins in our area. 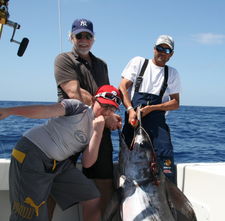 We also did one daytime swordfish trip and were successful in catching a decent sword of about 250 pounds. The fish hit hard and fought hard the whole way up. As it got to the surface it jumped a few times completely out of the water. I remember seeing the fish jump, but something looked very odd. Swords have a great big bill on them and when they jump you clearly see their big eye and the massive bill. When this fish jumped, I only saw a very short bill. My instinct was that this was still a swordfish, but due to the short bill, I also thought that it may have been a blue marlin, as I have caught blue marlin while day dropping for swordfish. As we got the fish close and finally into the boat, you could see that the bill was cut in less than half. The bill was probably eaten by a mako shark quite a while ago as the wound was completely healed. Makos often attack swordfish by first going after the sword to eliminate the massive bill doing them damage and then go after the tail to immobilize the swordfish. This swordfish was able to get away from the makos first attack and escape.

Spring is here and is my favorite time to fish. Not only will the sailfish be here for the next two months, but so will the big dolphin, big kings and the bigger blackfin tunas. Late April through June is also a great time to fish the late afternoon bite, as this is when all those species, especially the sails and tunas bite the best.

April is practically completely booked and May is filling up fast, but I still have open dates. Now is also the time to book your trips to the Bahamas where we will go target mutton snappers, yellowtails and groupers as well as big yellowfin tunas.
Dont hesitate, give me a call and lets catch some fish.