That's the best way to describe the fishing so far this month. Although January is usually one of the best months for sailfishing so far it has been a bit slower than average, but that was the case last year as well and then the sailfishing exploded. I truly believe that this year will be better. The past week or so we have seen a steady push of cold fronts with nightly temperatures consistently in the 40s and 50s. These colder temperatures will push down the bait and in turn the sailfish will follow. The reason that the report is titled hot and cold is that the first two weeks of January the sailfishing was decent. We had some good days going 9 for 9, 6 for 6 and 5 for 5, followed by some 2 and 3 fish days. The past few days have been tough and we had one single fish day and another trip that we never caught a sailfish. Whats surprising is that the conditions in Miami look good with strong north current as well as blue water. What has been missing is the amount of bait we should be seeing, but again these past few cold fronts will drive the bait down and the sailfish will follow.

Besides sailfish there have been some very nice mahis around. The biggest mahi we got was somewhere between 40 and 45 pounds, which was caught on 20 pound spinning tackle. We have also had a few other decent mahis between 20 and 30 pounds. We have caught some kings, and when we have been targeting them, we have fished in as shallow as 40 feet for them. I have not seen any cobias lately nor have I had any reports on them. That is a winter fishery so hopefully we will start tangling with them soon.

What has really been my biggest disappointment is that we went tarpon fishing twice and on both trips, we never had a single bite from a tarpon. We caught ladyfish, mackerel, jacks, but no tarpon. This worries me a bit because I have talked to a few other very good tarpon fisherman, and they have had the same results. It just so happens that they are dredging Govt Cut, which cannot be helping much. To top that off, they are also doing a beach restoration project at Haulover and are dumping sand there as well. Hopefully the beach project at Haulover will end soon and we can start catching tarpon again. The project at Govt Cut is going to go on for quite some time, so we will have to take a wait and see approach on that area.

The rest of January is completely booked, but February does still have some open dates. Now is the time to schedule you winter trips and if you are from out of the area, to come down and enjoy some great South Florida weather and fishing! 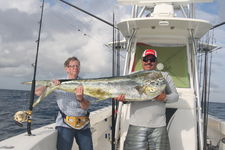