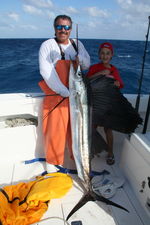 What a great start to the New Year. I have fished everyday with the exception of one day. That day we took care of tackle and performed the routine maintenance on the motors. The fishing has been great. The sailfishing has been awesome. We caught at least one sailfish on every trip, but for the most part we have been averaging 5 or 6 a day. We had one day that we caught double digits (10), had another day that we caught 9 and had multiple days where we caught 5 to 8 sailfish a day. The weather has been on the windy side, but that is what the sailfish like. When the bite for sailfish has been good, we have been getting quite a few doubleheaders and tripleheaders. We had one day last week, were we hooked three tripleheaders, one doubleheader and a single. Triples and doubles are fun as there is a lot of commotion in the cockpit, trying to keep the lines from tangling each other and breaking off. For the most part, we have been very lucky and have landed a lot of the fish we have hooked. I am still using circle hooks for the sailfish, and that allows for a very good hook up ratio (if you know how to use them) and also allows for a healthy release.

Besides sailfish, there are still a few dolphin around, but that has slowed down compared to December. Last week there were also quite a few large wahoo caught. I didnt get any, but quite a few of my buddies did. Depending on where you fish, the kingfish can either be everywhere or non existent. For the most part, the kings have been very small. Most wont even make minimum size so they can be a real nuisance when you are strictly sailfishing.

This past week or so, a few boats have also caught white marlin. The whites have been mixed in with the sails. A fellow captain, Jimbo, hooked a tripleheader. The triple was two sailfish and a white marlin. This month and next is typically when you have a shot at a white marlin. Quite a few years ago, we would catch a white every year around February. I havent caught a white marlin in Florida in quite some time, so I am ready.

With the windier weather, I have had some swordfish trips get cancelled, but once the weather breaks and the schedule allows, I will be out here targeting swordfish. We did go tarpon fishing one night and caught two out of three. The tarpon were actually decent size. One was around 100 pounds and the other one was about 80 pounds.

In a few days, I am heading to the keys to fish a sailfish tournament in Islamorada. I only have two open dates in January, but do have some dates in February and March, so give me a call and lets set up that trip.