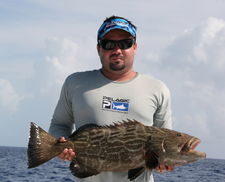 Sorry for the long delay between reports but I was on vacation for a couple of weeks and when I got back, I only had one trip that week, but luckily this past week I ended up getting 4 trips for the week.

Fishing on the edge has been very productive. As is usual, during the summer, we have a ton of bonitos. Although they are not good table fare, they are truly great fighting fish. The summer bonitos are usually pretty big and for a fish in the 10 to 20 pound range, they fight like they are a lot bigger. Almost all the bonitos we catch are on 12 to 20 pound spinning rods and they can be a handful. Besides the bonitos, there has been a good amount of decent kingfish. Almost every one of our trips on the edge we have caught our limit of kings. These fish have been from 10 to 25 pounds, and all of them were caught with live bait on spinning gear. Besides the kings and bonitos, we have had a few sails as well. The summer sailfish are fun to catch as it is almost always very calm and the sailfish just seem to be very acrobatic when it is so calm. 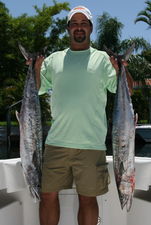 Offshore there have been plenty of dolphin around. Every time we ventured into the Gulfstream we found the dorados. Unfortunately, there have been a lot of small fish in the schools. On our last trip out to the Gulfstream, we found a school of over 100 dorado. We ended up keeping just a few as most of them were too small to keep. On the troll though we have caught some bigger dorado that were all keepers.

We also went daytime swordfishing on one trip. We didnt catch one that day, but we had two bites and one of them the rod was doubled over with drag going out, but unfortunately the hook pulled. Last August was a good month for swords during the day and at night. Its a shame that more people dont want to target these fish at night. To me, it sure is nice to fish while its cooler at night and without the sun bearing down on you. On the other hand, seeing a big swordfish on the surface during the day is a sight you will not soon forget, so I guess fishing for swords either day or night is pretty neat.

We still have at least one or two months of summer left which leaves us with still some time for a trip to the Bahamas as well as mahi fishing in the Gulfstream. Summer is also good for day or evening swords and the full moon of August and Sept should mean monster cubera fishing at night. That is a trip that is definitely out of the ordinary and can produce outrageous action with big snappers that can weigh up to 100 pounds. We also have the Islamorada and Miami Swordfish tournaments so if you would like to give those tournaments a try let me know. Take advantage of the last few months of summer so give me a call and lets set up those trips.