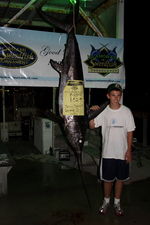 This past weekend we fished the Islamorada Swordfish Tournament. Every year that we have fished this tournament, we have done well and ended up winning it last year. The expectations were high as was the apprehension going into this weekend. My clients were a father and son duo (Dennis and Dennis Jr.) from New Jersey. Our target was to get Dennis Jr. the Top Junior Angler Award. Dennis Jr. is 15 years old and is both a good angler and a good listener, which is very important at tournament time.

We went down a night early and pre-fished an area south of Islamorada. We had one swordfish eat a few of our baits (tip rod and a bait we pitched to him) but we didnt stay connected. The rest of the night was slow. I spoke to another boat who had fished similar waters and they had landed two fish. I wanted to fish up north like I did last year, but since the other boat caught two fish and we had a shot or two, I wasnt sure which way to go.

The next day, the weather was beautiful and I decided to go with my gut instinct and head north. We got to our spot and fished and after a few hours didnt have much to show. About 10:30 we had our first bite. Our designated angler was Dennis Jr. He ended up catching two swordfish that night. One was a nice 152 pound fish that we weighed in and another one that we released. The 152 pound fish was caught by Dennis Jr. in less than 30 minutes. Considering his age and the amount of swordfishing he has done, that is quite an accomplishment, both size wise and time wise. I know of adult anglers that have spent hours on fish that size. The minimum fish to weigh is set at 60 (LJFL). The second swordfish we caught was smaller than the 60 minimum so we released it. We headed back to the marina to weigh in our fish and to turn in our card. After all the cards were turned in, we were in third place with 252 points. The lead boat had 304 points, so we were very close.

The second night we went back north. The bite was real good and we had 5 fish on that night. Dennis Jr. caught 2 more fish that night. The rules of this tournament are that for the second night, the fish has to be greater that the third biggest fish caught on the first night. Now the minimum size was moved up to 70 inches for the second night. The fish that we released was less than that, but not by much. It also happened to be the fattest short fish I have ever seen. It was probably bigger that the fish we caught the first night, but rules are rules. If you gamble and kill the fish and it doesnt meet minimum size, then you not only lose the points you would have had for the release, but get penalized another 300 points.

At the end of it all, we ended up with Top Junior Angler, 4th Place Overall and 4th heaviest fish. If we would have caught just one more fish, like the one that pulled the hook 30 feet from the boat, we would have had 2nd place and Top Overall Angler as well as Top Junior Angler. It doesnt really matter though; we had a great time during the whole tournament. I know both Denniss did, and as a father, I know Dennis has a great deal of pride in his son and watched his boy do a great job during this tournament. I really like the format of this tournament (as well as the Miami Swordfish Tournament). My clients were awesome, the fishing was good, and the tournament was a blast. These same clients have already booked me for next years tournament in Islamorada.