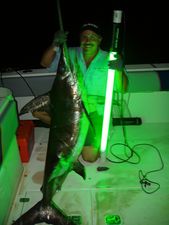 It?s been a while from the last report, but we do have a few things to report.
Finally, the long awaited Mercury Verados are installed on the Double D. We put a pair of 275 HP Verados on last week. All I can say is that I thought my 250XS Mercs were awesome, the Verados are even better. They have the best low end and mid range torque out of any outboard on the market. Top end is great too; with my top end over 50 mph. Not bad for a 34 ft boat with twins.

The fishing for the past few weeks has been so-so. It is also the time of year that the charter business slows down a bit. The best bet going on is the wahoo bite early in the morning. Big baits like speedos, gogs, runners, either drifted down deep or slow trolled down deep have been the ticket. We caught one about 30 pounds last week and lost another one next to the boat that was probably a bit bigger. On the reef there have been some kings. The kings have moved out a bit deeper ? mostly 120 ? 160 ft of depth. Big or small bait has been working on them. Move a bit shallower, and the bonitas were covering us up. If you had 6 rods out at one time, once the bonitas found you, all 6 rods would be on. Bonitas are a lot of fun, especially on light tackle. Dolphin fishing offshore has been hit or miss and the runs can be pretty far out.

Swordfishing at night has been up and down as well, and the afternoon and evening thunderstorms has kept us at the dock more than once or twice. We have gone three times from the last report and caught fish on two trips. The last trip we had, was slow. The wind was out of the west and the fishing for us (and everyone else on the radio) was pretty slow. The same pattern existed last year, and then the swords turned on pretty good. I would imagine that by mid to end of this month, the swordfishing will get better. September is almost always a great month. There are a few swordfish tournaments scheduled for September and October. I am open for Drew?s Dark Side of the Moon Tournament Part II http://www.fullmoonadventuresinc.com/index.htm." target="_blank">http://www.fullmoonadventuresinc.com/index.htm. That is scheduled for September 25th. After that is the Miami Swordfish Tournament http://www.miamiswordfishtournament.com/" target="_blank">http://www.miamiswordfishtournament.com/ which is scheduled for October 1st ? 2nd. Although a bit far, there is also the Islamorada Swordfish tournament on August 27th and 28th. Anyone interested in either one of these tournament, give me a call and we can set it up.