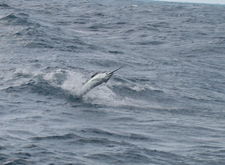 The Miami Boat Show has come and gone and we had plenty of trips and had great action with sails, kings, dolphin, tarpon and our first blackfin tuna of the season. Luckily we have had plenty of trips after the boat show and the action continues to be great. Starting with one of my favorites, the sailfish action has been great as long as you are willing to go where the conditions are right. There have been plenty of day these past few weeks that the majority of the sails we caught were right in front of Key Biscayne. There have also been a few days this past week that the conditions were better farther south and as many of you already know, I am willing to make the long runs as long as I stand a reasonable chance of getting my customers on quality fish. This has paid off and we have been averaging 4 to 6 sailfish per day and had a few days were we caught 8 and 9 sailfish in one day. Almost all of our sails have been caught kite fishing as well as some on flatlines. We did also catch a few sailfish while chasing freejumpers or floppers. Freejumpers are sailfish that are jumping without being hooked. The theory is that they are trying to remove remoras or parasites from their bodies. We have been watching for floppers and if we are lucky enough we can get ahead of them and either put out the spread quickly or cast to the sailfish. It is pretty exciting when you see a flopper and race over there and then cast to that fish and watch them eat your bait right next to the boat. It is a thrill and an achievement.
Besides the sails, there have been a few dolphin around. The majority of the dolphin have been in the deeper blue side of the edge. I havent seen any big dolphin while kitefishing but I really expect that to change in the next few weeks.

The kingfish have finally arrived and although most are extremely small, there are some nicer ones mixed in, including a 30 pounder we caught last week. When you get into the schools of the really small kings, most are not even big enough to eat a large kite bait and can quickly deplete you of your bait. At that point it is usually best to pick up and move especially if you are targeting sailfish.

We also caught our first blackfin tuna of the year and heard of 3 other blackfins caught so far. It is a bit early for the tuna, but we are more than happy that they are here.

Tarpon fishing has been great and although I have only done a few trips we have caught 1 to 3 tarpon per night and many of the other boats are doing the same and better.

Soon we will be getting more into the spring fishing pattern which means sailfish plus more dolphin, kings and tunas. Now is the time to book your trip for March and April, so give me a call and lets have a great day on the water.