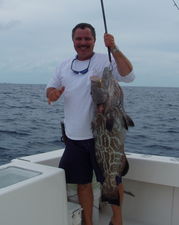 The fishing continues to be very good since my last report. We have been in the Bahamas twice, fished for dolphin offshore and stayed in on the reef for sails and tunas. Starting with the fishing on the edge, late afternoon has been the ticket. Most of my trips are starting at noon and ending at dark. We have caught blackfin tunas, sailfish, and kingfish on every single one of our late afternoon trips. We also had one trip that we caught 4 blackfin tunas and a 60 pound yellowfin tuna. The yellowfin ate a herring on a flatline and after close to an hour fight we landed this tuna on 20 pound spin tackle. Since we had the blackfins chummed up, we originally thought we had another blackfin on. After 30 minutes, we thought maybe the fish was foul hooked and was just dogging us. After another 15 minutes we saw the yellow streamers of a yellowfin. The last 15 minutes were the toughest, as the yellowfin just did big circles under the boat and we finally used the boat to our advantage and got her within gaffing range. It was an impressive fish on 20 pound spin tackle.

I also mentioned that we have been going out to the Gulfstream and catching dolphin. The dolphin fishing has actually been very good with some very nice size dolphin being caught. On almost every trip, we have caught dolphin over 20 pounds. Our biggest dolphin has been 32 pounds and we had one trip that we caught close to a dozen dolphin all between 16 and 29 pounds. We have been finding the dolphin under frigate birds and near debris, but the bigger fish have been under the hawks. Both live baits and trolled baits have been the ticket.

We also went to Bimini a few times and the fishing as usual, has been very good there. We have been targeting bottom fish there and have done well with the muttons, yellowtails and a few black groupers. For those who have never fished there, once you anchor up and start chumming, you never know what you may catch. Usually its yellowtail after yellowtail, but then the predators can move in and you can catch kingfish, amberjacks, sharks, cudas, jacks, mackerels, etc. Sometimes the predators can get so bad that they eat practically very yellowtail you hook. On our last trip, we just started fishing and I was free lining back bait, when a yellowtail snapper ate it. As I was bringing in the yellowtail, something ate that. Now I was fighting a much bigger fish with a very skimpy leader and small hook. I thought it was an amberjack, but I still fought him. Much to my surprise it was a 34 pound black grouper. You just never know what its going to be.

Swordfishing has still remained pretty slow. We had one trip that we never got a bite and just a few nights ago, as soon as we got set up, a monster thunderstorm chased us all the way in and we never really got to fish. The bite has been slow for most with very few boats catching fish. This is just temporary, and this actually happened about three years ago in August. After that slow month or two, the fishing really picked up and I bet you the same will happen this summer.

I may have time to do one more report before I head out to the Bahamas for close to a month. We will be going to a few different islands and hopefully will be catching plenty of fish.
Remember, now is the time to book your trips to the Bahamas for July and August and also to book your summer swordfish trips. We still have swordfish tournament dates open, so give me a call.