Best Mahi Fishing of the Year!!

All I can say is the mahi fishing has been outstanding! We are seeing a late season run of mahis that has compared to the best I have ever seen. There are lots of fish out there and a lot of big fish as well. To start, there is an enormous amount of Sargasso weed out between 8 and 20 miles offshore. The very light winds the last 2 weeks has allowed the weed to clump up and form huge weedlines. As a result of the enormous amount of weed and all the accompanying baitfish that are associated with the Sargasso weed, the mahis are there to feast on the bait. Sometimes having too much weed is a bad thing, as you dont know which patch is holding the mahis. But there are so many fish out there that it seems if one patch doesn't hold them then a patch farther down the line will. Having the tower has made a world of difference as well. I can be in the tower and while running down the weedline, I can spot which patch holds fish. Another great clue is that there have been lots of birds (mostly terns) working the dorado schools. If you happen to come across a few birds dipping and diving and they are near a weed patch you are practically guaranteed to catch fish. Being that we are in August, most of the dorado we are catching are now larger schoolies with the majority of them being gaffers. We do occasionally run into a school of small fish, but after catching a few and seeing the general size, we usually leave that school of fish and find another school of bigger fish. Most of the fish as I mentioned are gaffers but we have also caught numerous 20 to 40-pound mahis practically every day. As is key with mahi fishing once you hook a mahi or two you leave them hooked up next to the boat so the remaining school sticks around. At that point simply keep looking into the water and you will see when a bigger fish shows up, and the tower has helped immensely with that as well. Once you see the bigger fish, try to make a cast right to him with a live bait. The cast has to be accurate because there are usually so many fish in the school that a smaller fish will eat the bait if it is not thrown directly at the big bull or cow. To make matters even better, we are also catching a pile of fish while trolling. This works out great because now we can troll in between patches of grass or diving birds and catch fish in between. Also while I am up in the tower looking for fish we now have trolled baits that are producing behind the boat.

Farther inshore we have done a few half-day trips on the edge or have finished our day on the edge after catching a boatload of mahis. There are just a few sailfish around, and you do see some freejumpers almost every day. For the most part though it has been a pile of bonitos and a few wahoo. August is almost always a good month for wahoo and this August is shaping up just fine. Bonita may not be good for table fare but they do fight hard and also make excellent strip baits for daytime swordfish baits, which will be heating up in September through November. 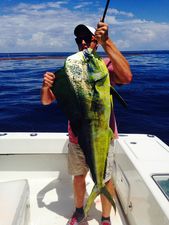