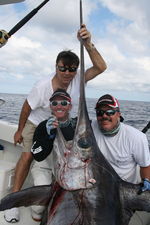 Sailfishing has still been relatively slow. We have been averaging about 2 to 5 sailfish per day and our best day since the last report we caught 6. Not bad, but not what it should be. We did have one trip where we did not catch one. You can probably attribute the lack of cold fronts for the lack of sailfish. Farther north there was a very good bit during January, but now that has trickled off and they are experiencing the same as us if not even slower. The same goes for the guys in the Keys. Being optimistic and talking to some of the other veterans, this has happened in the past and happened about 4 years ago. Then come March and the floodgates opened and it was a stellar bite all the way past April. Hopefully this is the case again this year.

Besides sailfishing, we have also been mixing it up with some tarpon fishing as well as a couple of swordfish trips. We have done several evening tarpon trips and have been successful on all of them but one. The best night we had we caught 4 tarpon and the biggest one was about 125 pounds. On one combo sail/tarpon trip, we had a very slow afternoon with the sailfish and then came in to do our tarpon portion of the trip. The tarpon fishing started slow but as soon as the sun set, the tarpon started to bite. Every drift produced a fish and by 8:30 we were about to call it a night but decided since the day bite was so slow lets do one more drift for another tarpon. Well we hooked one and boy did that fish want to fight. We ended up fighting that tarpon for almost 1hour and 45 minutes. That tarpon was estimated at 125 pound s and after a successful release we definitely called it a night.

We also did one daytime sword trip and one nighttime sword trip. The day trip was with my good customer Teddy. Teddy has caught sailfish and swordfish with me before, but last time Teddy came down we lost a monster sword just under the boat. This time Teddy came and the first words out of his mouth was I have a score to settle with these fish. Well as youll read on he certainly did. We started our first drop with no bites and I was about to pull up the bait and relocate, when I saw we were coming up to a good spot. I kept the bait down longer than I normally do and almost an hour into the drift I saw a very minor double tap on the rod tip. I reeled up a bit and the same thing. By the bounce it looked like a small fish. I reeled up again, but this time the rod just doubled over and it was game on. The fish fought hard on the bottom and then started coming up very slow. Usually a big sword just races up to the top after she fights on the bottom, but this fish was dogging us the whole way. I figured it must have been a small fish foul hooked or a small thresher shark. As we got closer and closer the fish fought harder and harder. Teddy did a great job inching the fish up by pulling on the line by hand while winding. Finally we got the wind on to the reel and got the fish about 50 feet away but that is as close as she wanted to be. She raced back to about 500 feet and we started the process of inching her back up. Eventually she started rising and she came up and showed us her massive bill and head violently slashing the top of the water. By the size of her head you could easily see she was over 500 pounds. Again the fish raced down to about 500 feet and again we inched her up. I dont know how many times she did this, but it was quite a few. Fearing that the leader would wear or the hole were the hook got her would start opening and we could eventually pull hooks, I decided to get her to about 100 feet down and the pull on the wind on by hand and Teddy would reel in the slack. Basically it is just wiring a big fish with a super long wind on. That proved to be the ticket as we got her close enough and stuck two gaffs and a harpoon in her. After a bit of rest, we all pulled her aboard and now saw why she fought so hard. She was truly a beast with a short length (LJFL) of 101 inches and a girth of 66 inches. She was a solid 550 pound sword and fought like the true gladiator of the sea that she is. My hats off to my crew and to Teddy for fighting her perfectly and finally settling that score. That night trip was not as productive. We had great weather and conditions but did not manage to get even one bite. There were actually two commercial buoy boats nearby and they also didnt catch any fish that night.

The last thing I would like to mention is that I am toying with the idea of taking my boat over the Venice Louisiana this summer and charter out of there. The fishing in the summer is phenomenal there with big yellowfin tuna, wahoo, dolphin, snappers, groupers, cobia and wahoo. They also do extremely well with day and nighttime swords as well as blue marlin. I have a good friend over there that has a charter service and he is going to help me get set up. Before I pull the trigger and decide to go, I would like to know how many of my customers would join me over there this summer. If I could get some of my own clients, plus some overflow from my buddy, it would be worthwhile and the fishing is truly awesome. I am actually very excited about it and hope it all works out. So if you are interested, please shoot me an email or call me and we can discuss the options.