What a great couple of weeks it has been. We have been catching all the fish species that we should be catching in the spring which are sailfish, big kingfish, blackfin tunas, and mahis. We have caught at least one sailfish on every single trip this past two weeks except for one trip and that was probably due to lousy rainy weather more than anything else. For the most part the weather has been great with clear sunny skies and great temperatures. We even had a few mornings where we had temps in the low 60’s. Seas are usually calm this time of year as well.

Starting with mahis, we have been lucky enough to find mahis both on the edge while live bait fishing and also hunting for them offshore. Most of the ones we have been looking for offshore have been under frigate birds anywhere from 200 feet to 800 feet. For the most part they have all been good sized mahis in the 5 to 25 pound range and I even did hear of two 50 pounders caught over this past weekend.

On the edge there have been plenty of kingfish, blackfin tunas and sailfish. The blackfins have been 15 to 35 pounds and late afternoons have been best although it seems like we catch at least two or three during the middle of the day as well. The kingfish bite has definitely been better in the morning and some of the kings are pushing over 30 pounds. The sailfishing seems to be better in the afternoons as well, but again we have also caught a few during the morning and the middle of the day. 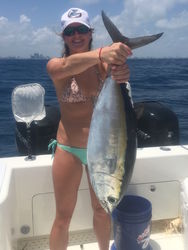 This past weekend we fished the Saltwater Shootout Tournament based out of Pompano. There were 150 boats in this tournament and the eligible fish were kingfish, blackfin tuna, wahoo, cobia, and dolphin. Our goal was to catch kingfish in the morning up to the north and then run south where I had fished the day before and catch blackfin tunas. Hopefully along the way we would see and catch a mahi or two. We started off of Highland Beach and put out our spread of three kites with 3 baits each plus 5 deep and flatlines. Soon enough we had had 3 kings that would weigh (10 pound minimum) with the biggest close to 30 pounds. The bite slowed down, the water looked terrible so I ran to where I had caught some tunas the day before just north of Haulover Inlet. Put out the spread again and caught a couple of more kingfish. An hour or so later we started catching some blackfins and ended up with three blackfins and a handful of kingfish. We also caught 3 out 4 sailfish, but sailfish are not an eligible species but we still had fun catching them. With the amount of fish we had, I severely doubted we would even make it in the top 10, but once we got to the weigh-in and saw how slow the fishing had been for everyone, I though maybe we had a chance at top 10. Well I was pleasantly surprised when it was announced that we finished 2nd out of 150 boats. We won some calcuttas and some prize money and it was a great day to catch some fish and have some fun.

The very next day I had a trip scheduled to the Bahamas my client Keith’s boat. We loaded the boat up with ice, tackle, food, and bait and ran across to Bimini. It was an uneventful ride with good sea conditions. We stopped and cleared Customs and Immigration, got our rooms at the Bimini Big Game and then proceed to go fishing. We hit a few deep drops spots and caught some nice size queen snappers and some button snappers. Then we headed north to NW Channel to look for yellowfin tunas. It wasn’t long until we found our first flock of birds, but no tunas. After finding flock after flock of birds we finally found a flock of birds with tunas busting underneath. With live baits and chunk bait we got the tunas going and for about an hour it was mad mayhem. We ended up catching 15 tunas. Most of them were small but we did lose some big ones and had some bigger ones (80 to 100 pounds) swimming around the boat. It was so much fun and everyone had a blast. We headed back to Bimini arriving at the Big Game at dark and just in time to get dinner. The next day we got our breakfast at Capt. Bob’s and then went south and did some yellowtail snapper fishing. Even though the wind and tide were opposite which is usually the kiss of death, we did very well with the snappers. Soon enough it was time to hed home and again we had good seas and an uneventful journey home. Overall it was a great trip with great clients and everyone had so much fun.

In the beginning of June I will be heading to San Salvador again to go marlin fishing and will be there for two weeks. In the meantime I still have some open dates in May and fishing on the edge as well as mahi fishing and daytime swordfishing are great options. Once I get back in the middle of June it will mostly be mahi fishing offshore, tuna and snapper fishing in Bimini and daytime swordfishing. So if any of these sounds like your cup of tea, give me a call and lets go catch some fish and have some fun.