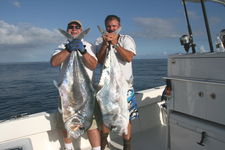 The wind finally laid down after an extremely windy two weeks. It laid down just in time for us. Today I had a great customer and good friend, Roger, fishing with us. Roger and I have caught practically every species that inhabits our area and have caught countless amounts of sailfish and swordfish as well as wahoo, dolphin, kings, tunas etc. Today we were looking at breaking out of the routine and trying something different. With the calm wind our thoughts first went to sight fishing for cobias, then maybe some grouper trolling on the patch reefs, followed by fishing for African Pompano on the shallow wrecks. We started the day netting a well full of pilchards and then caught some baits for the cobias. On our way out we stopped on one of the wrecks for the pompanos and hooked something but lost it on the wreck. There was a lot of boat traffic around so I decided to proceed to grouper trolling and come back later for the African Pompano. We had one grouper bite that took us into a coral head and unfortunately lost the fish but got all our gear back. We did this for a while but no more bites. We then headed towards Hawks Channel to look for cobias. The water was fairly clean down south which makes it easier to spot cobias swimming on the bottom or on top. As we got towards Miami the water got dirty and we had to give up on that idea. So far our plan was not working out as we had hoped. We got back onto the wreck that we had gone to in the morning and working the wreck hard we finally started to get some bites. Our first half dozen or so bites were all big bonitas, and although they fight hard, it was not what we were looking for. Roger hooked into a nice fish but that fish took him into the wreck. Most probably an African but who knows. He then hooked another African and this time we had too much heat on it and broke the line. We now knew what we were facing and it is a very fine line of having just enough drag to keep them from the wreck, but not too much as to snap the line. Roger hooked up again and this time fought the fish brilliantly. After what seemed like an eternity we boated a beautiful 38 to 40 pound African Pompano. It was Roger first African Pompano and we were all very excited. We continued fishing and I saw a massive African boil on one of our freebies. I yelled down below and they made a perfect cast and within a second had another pompano on. Again Roger went to work on this fish and we caught our second African of the day and it was even bigger. With that our time ran out and we headed home thankful that a little perseverance paid off with a great catch.

Since the last report we have also down quite a bit of sailfishing. Our best day we caught 7 out 9 sailfish, had a few more days with three or four and some days with just one or two. We did have one half day trip that was extremely windy that we did not catch a sailfish but caught some decent mahis. The mahi fishing has been very good on the edge and they have kept us busy in between the sailfish bites. Now heading into December we should start to see a more stable weather pattern with cold fronts coming almost weekly and that will get the sailfish heading south again.

The holidays are rapidly approaching and I have already booked quite a few days. I still have some dates open so if you have some friends or family in town or simply want to treat yourself, give me a call and lets set up a trip. I also offer gift certificates so if you have that special someone that you just dont know what to get them, give them a fishing trip on the Double D. Ill make sure they have a great time and catch fish as well.
Tight Lines,
Capt. Dean Panos