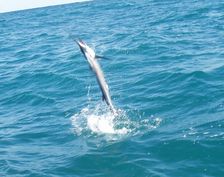 There is only one thing to say about the fishing in the past week and especially the past few days and that is that we have had a RED HOT SAILFISH BITE!
This past weekend we had the Sailfish Kickoff Tournament and the bite was out of control. We started by fishing on Friday with a charter and also doing some pre-tournament scouting. We ended up catching 5 out of 10 sailfish on Friday but also saw quite a few ?tailers?. Tailers are when sailfish are seen cruising the top of the water with their fins just out of the water. This usually happens when you have a north type wind with a good north current. I would venture to say that we saw at least 25 sailfish on Friday.
We fished the tournament with a great charter and we had a lot of fun and also caught quite a few sails. The tournament started on Saturday and with 65 boats entered, there was an incredible 400 sailfish caught and released in just the first day. We went 9 for 14 on day one and in a normal tournament that would have been outstanding. In this tournament the lead boat had 17 releases in the first day. With 400 sailfish released in one day, that is one sailfish released every minute and 10 seconds. There maybe other places in the world that you can have double digit releases in one day, but a fish every minute and 10 seconds has got to be a world record of some kind.
The second day it slowed down a bit but there were still over 150 sailfish released that day. We caught 4 out 5 on Day Two. That gave us 13 releases in two days. The lead boat won with 23 releases.

There are plenty of places in the world that you can go sailfishing, but Miami is definitely one of the top spots. Not only do you have great sailfishing (as well as swordfishing), but also you are in the comfort and safety of the United States. You don?t need to travel abroad to catch sailfish, just come to Miami. News of this tournament will spread like wildfire, so book your trips early. Sailfish season will last into spring.

That?s it for now, enjoy the upcoming holidays and give me a call and lets go fishing!