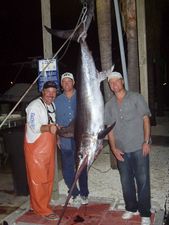 The sailfish bite in Miami is still going very strong. Our best day was 5 sails in one day and we probably could have done better had we fished the days that the North wind was blowing. We just got a cold front last night and I?m sure the sails will be biting real good again this week. Besides the sailfish there have been some dolphin and kingfish on the edge and also some decent bottom fishing for groupers.

The majority of this report will be for the incredible swordfishing we had last week. On Thursday we headed out in moderate seas and caught two out of 5 swords that we hooked. One was released and the other one was boated. The boated fish had a lower jaw to fork length of 78 inches. It weighed in at 221 pounds on the new scale at Keystone Point Marina.

Our next swordfish trip was Saturday night and we were fishing the Dark Side of the Moon Tournament that we had won last year. This year we didn?t win but we had a night to remember for a long time. It was a great bite and we actually caught 8 swords out of 14 that we hooked. We must have had 20 bites during the night. I had 3 dozen live baits of which we used 24 of them. I also had 18 rigged squid that we used them all as well as a few more that I rigged on the boat. Lines in were at 6:00pm. At lines in we put out our first bait and were floating it out on the jug. I had my second bait down and was just about to float it out, when one of my customers who was letting line out on the first bait said he felt something strange with the line. I looked up and the jug had popped off. I told him to reel like mad and a few seconds later we were tight on a sword. It was only 6:10 and we already had a fish on. The sun was just setting and we actually got to see the swordfish jump in the dim light of the remaining sun. What a sight to see. We got that fish which was 150 pounds and were on a good start. The rest of the night was frantic and chaotic. Like I said, we caught 8 swords that night out of 14 fish that we had on. I would like to congratulate all the winners, as I know most of them. My other mate Vick was on the winning boat and the caught a fat 84? fish that weighed 301 pounds.

I expect both the sailfish bite and the swordfish bite to stay good through the whole winter. Nights like this don?t happen that often, but they do happen. I have sold quite a few gift certificates for fish trips as holiday gifts. If you still don?t know what to get your special someone (or yourself), call me about a gift certificate.

You can?t catch them on the couch, so give me a call and lets set up that trip.