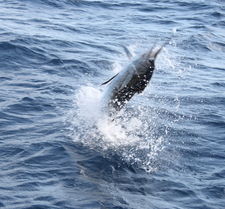 In the past week or so, I have fished a few days as well as a few nights. I must say that the fishing during the day has been much better than the swordfishing at night. Early in the week, there were quite a few kingfish being caught on the reef. As long as you put in a little bit of time, you could catch your limit of kingfish. The kings were a bit spread out form 180 feet of water in to about 100 feet. The size was typical of the fall run, and most kings were from 6 to 15 pounds. While kingfishing we also had baits on the bottom and caught a few mutton snappers. Some of the guys were targeting muttons only and did fairly well.

As the week progressed, we got a little bit of NE wind. With the NE wind we also had some North Current and blue water. With these conditions we were able to find both sailfish and decent size dolphin on the edge. Using pilchards, herring and goggle eyes, we baited the kites and flatlines. The largest dolphin we caught was a 24 pound cow, which was part of a double header. The second dolphin (bull dolphin) was easily in the 35 pound class, but unfortunately the hooked pulled after 10 minutes or so. By the way, I got a new digital SLR camera and should have some real good photos coming up. The photos I have on the web are shrunk in file size to allow for faster uploading, but I do have the Hi Res originals of all the pics. Check out the new picture of the sailfish jumping and the colorful dolphin on the photo page.

Besides the kings, dolphin and sailfish, there are still quite a few bonitos around. Although these fish are usually 8 to 18 pounds, they fight like no tomorrow and will quickly wear out your angler and your gear.

In the next two months we should start seeing a more consistent bite on the edge for both sailfish and dolphin. We should also start to see some wahoo on the deeper edge as well. We are getting into my favorite fishing season and will soon be going at it with sailfish bites all day. I have already booked some sailfish trips for this winter and now is the time to reserve and get the exact day you want reserved.

This is typically a good month for swordfishing, but so far September has been extremely slow. We had two trips back to back that we didnt even get a bite. From all the guys that I have spoke to, the bite has been slow everywhere. I know this can be extremely disappointing to the charters, but we work harder during the nights that it is slow, compared to when the bite is red hot. We are moving baits around, trying different options to come up with some action. I think part of the reason for the lack of swordfish activity has been the temperature of the water. We have had an extremely hot Gulfstream this year, with temperatures in the 86  87 degree range. The top of the preferred temperature profile for a swordfish is 86 degrees. During the Islamorada Tournament and a few days after, the temperature dropped a degree or two and the swordfish responded by biting. As we progress out of summer and into fall, the water temperature will drop and the swords should come around. We are entering a good moon phase as well as a time when the water cools a bit. I expect the swordfishing to pick up quickly and get a lot better in the next few weeks.

I have openings this week and next and would love to take you out to catch sails, kings and dolphin in the day or swords at night. With these few days open, I also plan on doing a little more R&D on the daytime swordfishing. The last sword we caught during the day was with a big LP electric reel. I think the time has come to take on of these gladiators during the day with conventional tackle (plus some tricks to make it easier). Ill keep you posted on the results.