Last week the charter business slowed down a bit as it usually does after Labor Day. I took advantage of the down time and cleaned, rebuilt and put new Sufix 832 on all my electric kite reels. I also rebuilt all my spinning reels and basically got everything ready for what I hope is a great sailfish season which is right around the corner. 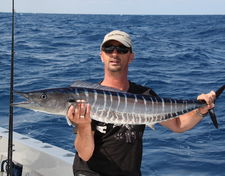 Prior to last week, the fishing was pretty good. We had a tropical storm go by which moved the water around a bit and it took a few days for the fishing to come back around. Once it did though we had quite a bit of luck on all our trips. Again, we had a variety of trips from daytime swordfishing, mahi fishing, and fishing on the edge.
Starting with the sword trip, I had a good group of guys from the west coast of Florida and we gave the daytime thing a try. We started of by catching a decent 15 pound mahi and while we were fishing our first drop. The day progressed and we werent getting any bites but the guys had patience and on the end of the third drop we got tight and everything held together, the fish stayed on and we were rewarded with a decent 125 pound daytime swordfish. Everyone was happy and we had plenty of swordfish steaks to go around.

The mahi fishing had slowed down just after the storm, but just a few days later the wind died down and the fish bunched up again. Most of the mahis were on floaters, either wood or patches of grass, and the mahis were all decent size schoolies from 5 to 15 pounds. I didnt see any great big schools of 50 plus fish, but there were schools of 10 fish or so and all of them were heavy lifters or gaffers.

We also fished on the edge and actually had a very good day. We had a bit of NE wind and that seemed to fire up the sailfish. We ended up catching 5 out 7 sailfish which is very good for early September. It was a lot of fun catching a few sailfish, and I am really itching to get sailfish season going in full swing. We also caught a few small blackfin tunas and a few wahoo. Fall was always a good time for the smaller blackfins, but the past few years the tuna bite was slow. Last year it started to materialize again, and this year it looks good again. Hopefully it will be a pattern that keeps getting better every fall. Although the wahoo we caught were 25 to 30 pounds, in the fall, especially around the full moons, the wahoo bite in Miami can be very good. Just these past two weeks, I have heard or seen more wahoo caught than I have in quite some time. The average fish has also been decent in size including fish upwards of 65 pounds.

Like I mentioned earlier, it only a very short while, we will be fishing the edge almost exclusively, except for some day time swordfish trips (best two months of day swords coming up right now). The sailfish bite will continue to get better and soon the cold fronts will be rolling in bring cooler weather and even better fishing. Now is the time to book your winter sailfish trips as I am already getting bookings into February. Also if you havent booked your daytime sword trip for this fall, you better hurry up before the season ends. For that matter, dont forget the winter wahoo trips in Bimini. I am really getting stoked for a great winter season!