Its been 3 weeks since my last report and sorry for the delay, but the Miami Boat Show was in town I have been swamped with trips. The fishing has been a bit up and down. The week prior to the Boat Show, the sailfishing was actually pretty good. No great numbers but fairly consistent with 2 to 5 fish per day. The week of the boat show, the fishing was really rather poor. We did manage on most trips to catch one or two sailfish per day, but that was really it. There was a big push of green water and no current, which made the fishing really tough. I had a 2-day charter with some very nice people who wanted to catch sailfish and on the first day we never saw a sailfish and on the second day we hooked one but it quickly got off. We managed to catch some kingfish and a mahi or two but it was very tough fishing with tough conditions. That's a shame that that happened during the show as many clients come down to go fishing and then to go visit the show. The week after the show, the sailfishing did pick up a bit and we were catching 2 to 6 sailfish per day. Our best day we hooked 11 sails and caught 6. Not the best ratio, but getting 11 shots was a lot of fun.

The conditions are finally starting to improve and it's a shame that we don't have great conditions since we have had a slew of cold fronts come through. We even saw morning temps as low as 38F one day. It may not sound too cold for some of you, but for South Florida it was freezing. I had so many layers of clothes on, I am surprised I could move. The temps though are now back in the 70s and it feels great.

Besides the sails, there have been some kingfish around. Nothing big yet but the big kingfish usually get here around late March and into April. There also have been a few mahis around and they have been anywhere from a few pounds up to about 30 pounds. I havent swordfished at all in the last few months, and I should have the week of the Boat Show because there were a few boats catching 3 to 4 swordfish per day and couple that with the slow sailfishing, it probably would have been a better option. Hopefully the bite continues because I have a daytime swordfish trip this week.

On the Double D front, we have made some improvements. I purchased brand new Alutecnos sailfish reels and even though there was nothing wrong with my older Alutecnos, we now have brand new equipment. Those reels coupled with Biscayne Rods are the best sailfish outfit out there. I also have the brand new Mercury 350 outboards on order and they should be here in a few weeks. I cant wait. During the Miami Boat Show, SeaVee debut the brand new 37 stepped hull SeaVee openfish. I actually fished on it for a day and all I can say is OMG! That boat is a beast and dont be surprised if the next Double D is a 37 SeaVee.

We are now getting closer to spring and if last year was any indication, the sailfishing will be a ton better in March and April. Last year we saw some slow sailfishing until March and then it was wide open for a couple of months. We will also see the bigger kingfish and soon enough we will start catching blackfin tunas. As a matter of fact, I have heard of at least on big blackfin every day this week, so maybe they are on their way early this year. If you havent booked your spring trips, do so now as March is filling up and April is almost half full already. So dont wait, give me a shout and lets go catch some fish! 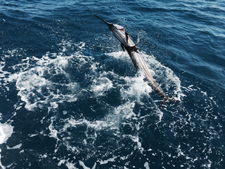