Time To Go Get -Em

The cold fronts are really starting to pour through in South Florida and that is only good news for the sailfishing. So far the majority of the sailfish are still north of us but these consistent and quite strong cold fronts are going to move these fish into our waters very soon. Last year we had very few cold fronts and thusly most of our sailfish did not show up in large numbers until end of February. This year though, with the amount of fronts we have already gotten and more forecasted in the weather pattern, we are very likely to see the big body of sailfish in Miami waters in the next few weeks. That doesn't mean we are not already catching sailfish here. Instead of the 2 to 5 sailfish a day we are already seeing, the numbers will soon be in the double digits. Now don't get me wrong, we won’t have double digit days every day but we will start seeing some double digit (over 10 sailfish releases) days very soon. 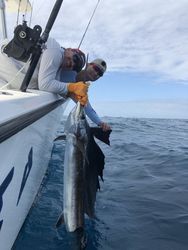 Sailfishing has been fairly consistent the past two weeks although not record breaking. We are getting some kingfish as well as a few mahis and a few bonitos on our trips as well. Hopefully these numbers will increase soon as well. A few weeks back we did have a yellowfin tuna eat one of our kite baits and from the hole it left in the water it seemed to be a substantial fish. This past weekend during a sailfish tournament, one of my buddies caught a 115-pound yellowfin tuna on 20-pound tackle. Congrats to them because that is on heck of a catch on light tackle. Last year we caught 7 yellowfin tunas but none of them weighed more that 50 pounds. In the years past we have been fairly lucky with the bigger tunas catching a few a season over 90 pounds, so I know how difficult it is to get a big tuna on 20 pound tackle especially using 30 or 40 pound leader. Everything has to go just right. I am certainly looking forward to catching a few of these in the next few months.

On the swordfish side, I haven’t done any swordfish trips, but the guys that have gone have had some success. Nothing really big has been caught but you never know when you go swordfishing.

This past weekend we fished the Sailfish 400 tournament out of Miami. The fishing was fair for most boats but some boats did well. The winner of this tourney caught 15 sailfish in 2 days and congrats to them. It takes hard work, a lot of skill and a bit of luck to be on top and they did just that. We didn’t bode as well and caught 6 sailfish in 2 days, which was sort of middle of the pack. Although I would like to win every tourney I fish, I realize how difficult it is and as long as my team worked as hard as they could, then it was a successful tournament. Middle of the pack is not were I want to be so I can guarantee you we will try harder and prepare even more for the next one.

I would like to announce that I have a new hook sponsor this year and that is VMC. So far the hooks I have used are completely awesome. I looked at a lot of companies and VMC had the exact lineup of hooks that I use and the materials they use and craftsmanship are top of the line. I have been using these hooks since the beginning of the year and have had zero failures and have had an extremely good hook up ratio. Check them out at https://www.vmchooks.com

Another announcement I can proudly make is that I won Top Sailfish Release Captain for Atlantic Sailfish and top South Florida Release Charter Boat Captain by The Billfish Foundation. To me it is quite an honor as there are hundreds of participants on the Release/Tagging program and to win is quite the honor.

As far as upcoming trips, I still have a few dates in January open and roughly 50% of February and March are already booked, which means 50% is open, so there are still plenty of dates available. So give me a call and lets set up those trips.