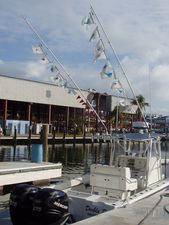 That was how many sailfish we caught yesterday. It was an absolutely great day. We managed this with only one angler (and myself) and during a half-day trip as well.

The night before, my charter who is an airline pilot called me and informed me that he was having a hard time getting out of Chicago and may have to postpone his trip for a week. I told John that he should try his best to get down here because the sailfish bite was very good. He called about an hour later and said he would be on his way.

John arrived at the marina on time and the forecast was for light winds, which is not the best for sailfishing. The weatherman was wrong though and there was a good breeze out of the E-NE. We went and got plenty of bait and also had a few tinkers that a buddy of mine left for me. We finally got to the edge at around 2:00pm and there was a nice blue edge with plenty of current. I got the first kite out and before I could get the second kite out we had our first sailfish on. Unfortunately that one threw the hook on its first set of jumps. I was hoping this wasn?t a bad omen, but minutes later we were onto a double header and I still hadn?t gotten the second kite out. John and I caught that double and we then reset. The rest of the afternoon was almost all multiple with most being doubles or tripleheaders. I didn?t live chum much and the one time I did, we had five sailfish on at one time. With just John and me we had our hands full, but we did manage to catch 4 out of the 5. It was now approaching 5:00pm and we were sitting at 15 for 18. My personal best on my boat was 18 sailfish. I didn?t want to get my hopes up high as the sun was going to start fading soon. No sooner had those thought past that we had a tripleheader and landed two out of the triple. I got the baits out as quickly as possibly and mere seconds later we were onto a double. I landed my fish first and then John landed his. I was ecstatic as we had now broken my personal best and had caught 19 sailfish. I was jumping around the boat as happy as could be when I noticed one of the reels had been completely emptied of line, but the rod was still bent over. I must have had turned the clicker off and didn?t hear or see the bite during our celebration. John got quickly onto the rod and we backed down on this fish and ended up catching our 20th. It was now getting dark and I was reeling in the last kite which only had one half dead bait on it and before you knew it, that bait got eaten and we now had caught 21 out of 26 sailfish with just one angler and in less than 5 hours.

The bite was obviously very good and has been very good for a week. They are still catching fish to the north of us and that should mean that those fish will also move through our area. It has been a great start to the sailfish season and hopefully is just a glimpse of what is yet to come. My dates in January and February are almost completely gone and March is starting to book. Call now and lets set up that trip!