You can feel a slight change in the weather with cooler temperatures and cooler evenings. A few cold fronts have also made there way down here. Besides the crispness in the air, you can see it as you are running down the edge. The sailfish tournament teams are out pre fishing, catching bait, etc. Instead of running offshore looking for mahis more boats are fishing on the edge targeting sailfish. The chatter on the VHF is now more prevalent with sailfish releases, as well as seeing more sailfish freejumping along the edge. It is the RIGHT Time of year!

Luckily we have caught a sailfish on every trip these past two weeks with the exception of one ¾ day trip that we didnt get one but did catch other fish during that trip. Our best day was 3 out of 4 sailfish releases and had a few days going 2 for 3. Not the numbers we are going to be seeing real soon but there have already been reports of boats catching 6 to 8 fish per day. Every billfish you catch is special but we did have one trip where we had a grandmother, her son and her grandson and wouldnt you know it but they each got to catch a sailfish. That's three generations on board each catching their first billfish.

Soon the sailfish tournaments are going to start and I am running Team SeaVee/Kimbuktu this season again. Last year we won some money and hopefully we can do the same this year. The boat is a brand new 39 SeaVee with IPS drives and a full tower. We will also be fishing the new 43 SeaVee walkaround with tower in some of the tournaments as well. Wish us luck!!

Besides sailfish, we have also had a pretty consistent mahi bite along the edge. These fish have been bigger than your schoolie variety with most fish gaffers between 8 to 25 pounds. Mahis are always a welcomed surprise as you are waiting for the sailfish bite. In addition to the mahis, last week there were quite a few cobias caught, mostly on the bottom rods, but unfortunately 90% of them were undersized.
There has also been an assortment of bottom fish with some mutton snappers, amberjacks and some African Pompano.

We are half way through November and now is the time to start planning your winter sailfish trips, especially if you want to fish during the Thanksgiving and Christmas holidays. Book your trips now and lets go catch some fish! 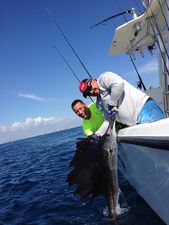