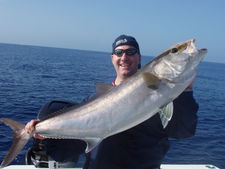 Sailfish continue to be the species we are targeting. We have caught sailfish on every single trip but one. Earlier in the month, we had decent water quality and North current, and we were getting multiple sailfish on all our trips. We were averaging 4 to 6 sails per day with our best day at 9. This week, the current slowed down and actually started going south with the water turned green. With those conditions, the sailfish bite slowed way down. We still caught at least one sailfish on each trip, but we had to work long and hard in between bites. We had some real cold, cold fronts roll in but unfortunately the conditions (water quality and current) havent switched around yet. I guess what I am trying to get at is that when the conditions are right, the sailfish action can be great, when the conditions are wrong, you may still get one or two, but it makes for tough fishing. The good news is that green water and south current arent the usual conditions and I am sure we will see good clean water with north current in a few days if not sooner.

I did have a trip last week (Wednesday) that was worth mentioning. We had west wind which is not a great wind for sailfishing, but we had slight north current and decent looking water. We had two kites out with 3 lines on each kite and although there was plenty of wind for the kites, the seas were flat (west wind - lee of the land). After only a short amount of time we had a sailfish on the short left kite, then another on the middle let, and then another on the long left bait. I had a husband and wife on board and they got on the rods quick. I had the third one in the rod holder. Seconds later the right kite baits get hit and we now have 5 sailfish on at one time. Obviously there is mass pandemonium, but my anglers do a great job keeping the lines clear of each other and we eventually catch 4 out of the 5 that we hooked. The part that is burned in memory though, is when we had those 5 fish on, there were at least another 10 sailfish in the water cruising with there dorsal fins out looking for food. It was a sight that will not be forgotten easily, especially since the water was so calm. After we caught those 4 sails, I had a lot of rerigging to do, and threw out a few flatines to keep baits in the water while I was rigging. Needless to say, we had a double header on very quickly and caught those two as well. Then the current died of and the action slowed down.

Besides sailfish, there have been a few dolphin around, but not every day and not very many. What is surprising has been the lack of kingfish this winter. They have been far and few to find. There have also been some amberjacks on the wrecks. This is a little early for the AJs but until recently, we have had a very mild winter.

We also went swordfishing one night since my last report and had a great night with flat calm seas and great action. Our first bite was on a shallow jug bait and we caught a beautiful 250 pound sword. That sword was jumping everywhere on the bite and really fought hard. We missed our next bite but then caught another smaller sword later in the night. Going 2 for 3 and releasing them all we called it a night and headed back in with great memories and flat calm seas.

February is practically done and it may have been my busiest February ever. March is around the corner, and the first two weeks are booked up pretty solid. I do have about 6 or 7 days open towards the end of the month so give me a call and lets go catch-em!