What a great trip we had to San Salvador Bahamas. To start we had great weather traveling to and from San Sal. The distance from Miami to San Sal is just less than 400 miles. From Bimini we were able to get there in less than 9 hours averaging about 40 to 45 mph. It was absolutely gorgeous weather. We also had great weather coming back and from San Sal to Miami and it took us a little over 10 hours. We stayed at the Riding Rock Inn and the boat was at the Riding Rock Marina.
While in San Sal we had 4 different groups come over and I am very happy to say that every group caught at least one blue marlin and some groups caught as many as three. We fished 9 and a half days and raised over a dozen blue marlin. We hooked 11 and caught 7. Size of the blues was between 125 and 300 pounds but we did have one on the last day that was pushing over 400 lbs.

It was strictly trolling and our set up was as follows:
We had a Ledge Logic boom https://ledgelogic.com and a firetailz dredge http://www.firetailz.com off the gunnel. Behind that we had two squid chains controlled from the tower with mackerel on the back end of each squid chains. On the short riggers we had a chugger head ballyhoo on one side and a swimming ballyhoo on the other side. All the baits we had were from Baitmasters of South Florida. http://www.baitmasters.com/store/default.asp and they were perfect.
On the long riggers we pulled two lures. Sometimes we changed the spread and pulled 4 lures or 4 baits. 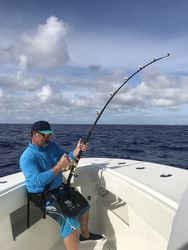 For the most part the dredge will lure in the marlin, which will then try to eat the mackerel behind the squid chain. Once I see the fish behind the squid chain, I pulled the mackerel away from them, the mate flips over a pitch bait (rigged ballyhoo) and hopefully hook up. If we miss them with the pitch bait then either the short baits or the lures on the long get eaten. Most of the bites we had where just as described, although we did catch a few blues that never came up on the teasers (dredge or squid chains). It is a very visual fishery and seeing a blue marlin just a few feet behind your boat is so very exciting. 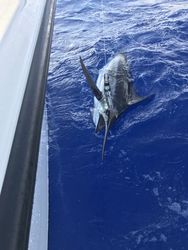 The last fish we saw during the trip we did not catch but that is the fish that will keep us coming back. It was a slow day and the day was winding down. Instead of pulling everything in and running back to the marina, I decided to fish all the way back to the marina. Although most of the blues are caught on Sandy Point in San Salvador, I had caught a few right up front from the marina. We were trolling along and out of the corner of my eye I see a lit up 400 pound blue marlin charging the squid chain. I pulled the squid chain away for the fish and she quickly charged the other squid chain. I pulled that one away from her, and Mike pitched her perfect pitch bait. She lunged at the bait with her whole head out of the water, but unfortunately we missed her. Seconds later she hit the left short lure but no hookup. I see her charging the right short lure but wouldn’t eat it. I sped the boat up and she instantly devoured the lure. She popped the rigger, drag started screaming but she pulled off. Although she got away, it was a show of pure muscle and speed and everyone on the boat saw the whole thing. It was a sight I will never forget.

I am planning on being there in June of next year so if marlin fishing is in your blood, plan ahead now and we can talk about dates for next year. 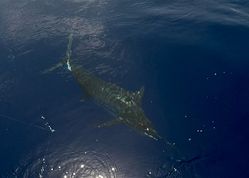