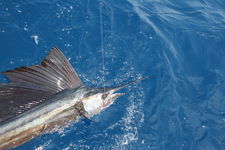 The fishing in the end of April surprisingly slowed down a bit, but luckily it picked right back up in May. There are still plenty of sailfish around. We have been averaging 3 to 4 sailfish per day. Most of these sails are the full grown spring sailfish and are around 50 to 70 pounds. Even after a full season of sailfishing almost done, I still get excited as I watch a sailfish approach the kite bait, eat it and then jump all over the surface. We have also caught quite a few sailfish on our flatline baits and had quite a few more eat the mid depth and even the bottom baits. We had a trip last week were we caught 3 sails and all three came from the mid depth baits. Not only is it prudent to cover all the different depths for many of our species, but kingfish especially seem to love that mid depth bait and there have been no shortage of big kings. On almost a daily basis, we have been catching at least one 30 pound plus king and many smaller than that. This is a great time for the big springtime kingfish and they are not letting us down.

For the past two months we have been complaining about the lack of bigger blackfin tunas, but once May came around, so did the bigger tunas. They are still not in full swing, but at least some of the bigger ones have shown up. I had a late afternoon trip last week, and around 5:00pm I started live chumming and emptying the livewell hoping that the tunas would show up and they definitely did. We had 4 tuna bites in a matter of a few minutes. We lost two and caught two and both of the ones we caught we in the 30 pound class. The big tunas are on their way and the next few weeks it will be a blast targeting and catching them.

We still havent seen many dorado either offshore or inshore. There have been a few days were youll catch a few but definitely not in the numbers that we would expect in spring. The mahi fishing in the Keys has also been slow so well have to wait and see when they will show up.

The bottomfishing has been decent as well. There have been quite a few mutton snappers around as well as some big AJs on the wrecks. If you havent caught a big saltwater fish and a fish that will really fight hard, then a big amberjack is what you need. These fish are often called back breakers and reef donkeys and they definitely deserve those names.

I also did one daytime swordfish trip since my last report and we were lucky enough to catch one. It wasnt a huge sword but was around 100 pounds and was released. W e had no bites all day and I usually pull up around 3:00pm and look for mahis on the way back from the sword grounds. This time I decided to give it another 5 minutes and wouldnt you know, but at the very end of the 5 minutes we got a bite. After quite a few whacks, the sword finally ate the bait and we were able to hook and fight it. The day fishery and the night swordfishery should get a lot better in the next few months and will peak in the late fall.

In the next two months I already have quite a few trips to Bimini planned and I am really looking forward to them. I have mostly repeat clients on those trips but also have a few with new clients that we can hopefully have some banner trips. I also have swordfish trips booked and trips in the Gulfstream hunting mahis. May and June are still good fishing on the edge especially in the late afternoons. There is no shortage of fish and the weather is usually great in May and June, so give me a call and lets set up that trip.