Springtime is here and with that comes a lot of variety. To start there are still plenty of sailfish around. Our best day this week was 6 sailfish and we had a few other days with 4 and 5 per day. Although not in the numbers we saw last month, there are so many other fish around to more than make up for it. One of them is the blackfin tuna and they have finally shown up. I dont think they are here in the big numbers yet, but I bet you that will happen in the next couple of weeks. We have been pretty consistent catching a few blackfins every trip, and our best day was 4 big blackfin tunas. Mixed in with the tunas are a ton of bonitos. What I should have said is mixed in with the bonitos are a few tunas. The bonitos are everywhere right now and I don't mind catching them at all, but every once in a while after your 20th bonito, you are hoping the next bite will be a blackfin. If it is blackfins you are chasing, the best time to target them is late afternoon and to have lots of live chum aboard. The certainly react to live chummers (mostly pilchards) and it is an awesome to see them blasting the freebies and hopefully your hooked baits as well.

Besides the sails and the tunas, and lets not forget the bonitos, there are also some kings around. We had a day last week that we caught quite a few big, big kings up to 40 pounds and lost one on the leader that would have pushed 60 pounds. We also had a great day with kingfish today, but they were not as big, but just as plentiful. A small trace of wire is needed and boy do those big kings love live goggle eyes and blue runners. It is quite the sight to see a big king skyrocket in the air with your kite bait in his mouth.

There have also been some dolphin around. The dolphin on the edge have not been as plentiful as we should be seeing right now and the dolphin offshore have been a bit spotty. But this is the time of year for them and Im sure they will not disappoint us. Grouper season also just opened and a few nice groupers have hit the docks as well. We did catch a big black about 30 pounds a week or so ago and that was two days before the season opened, so we had to let it go back.

I also had a few swordfish trips. We did two daytime sword trips. We caught and released a small swordfish on one of the trips and the other trip we did get a bite but failed to stay hooked up. I also did a combo night/day trip and the day portion produced a nice swordfish, but we did not get any bites at night. I really cant put my finger on t, but the night swordfishing for the past two years has really been terrible. It has come to the point, that I really do not promote and actually try to convince customers to do a day trip instead of a night trip, since the night fishing is so bad.

What is not bad is the reports I have gotten about big yellowfin tunas in NW Channel in the Bahamas. Quite a few boats have gone and almost all of them have scored big. This is a specialized trip and one that I love to do. If you want to catch big tunas on stand up gear, give me a call and we can set it up.

The bad news is that I am completely booked from now until middle of June. I have trips on the edge daily and pretty soon will be leaving for the Bahamas and will be there for almost 3 weeks. When I get back though, it will be prime time for tunas in the channel and bottom fishing in the Bahamas as well as fishing the edge for tunas and kings and hunting mahis in the gulfstream. So call now and lets get that trip in the books before I leave. 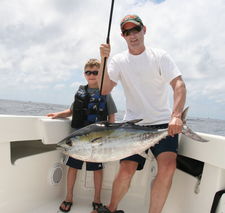