It's About To Start 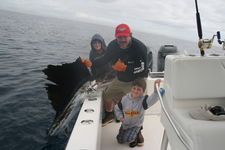 The fishing in Miami has slowed down a bit in the last week or so. We have been averaging anywhere from one to four sailfish per day. The good news is that we have caught at least one sailfish in every one of our trips for the past two months or so. Unfortunately in the last two weeks, we have not seen any big numbers of sails. The most we had was five shots in one day in which we caught four. For the most part we have been pretty good in catching what we have hooked and have often gone 100 percent in our hook up ratio. As I have said in the past, I do expect this to change and we should start seeing bigger numbers any day now. The same has been occurring all up and down the coast. One day the guys in Palm Beach will have a great day, then the guys in Miami or the Keys will have one or two good days, but eventually these fish will have to start moving and that is when we will kick things into high gear in Miami.

Another good part of the past two weeks since my last report, is I have had a lot of charters with families with young kids. We have had quite a few trips with moms and dads along with their children. Most of the kids have been from 8 to 13 years old and it is awesome to watch these youngsters catch their first sailfish and for that matter, their first big fish of their lives. It is fun to watch the kids as well as watch the parents. The smiles on both there faces are awesome.

Besides sailfish, there have been a couple of days with decent dorados while kite fishing and a few days that the kingfish have been biting as well. There also have been quite a few bonita around and that certainly takes up the time between the sailfish bites.

I havent done any swordfishing since my last report, but when the weather has been good, the boats that have gone out have done well with the daytime swords. The evening sword bite has been slow from the reports I have heard.

March is already booking up very quickly and all the dates are nearly gone. April is getting booked as well, but I still have some open dates for both these months. Give me a call and lets set up that trip.

Go out there and catch them up.